Arriving for a weekend in Budapest stirs up mixed emotions. You’ll be forgiven for thinking you have just arrived in another modern city in Europe tailored for todays tourists when you land at the city airport. With its all new shiny interior and all the facilities you would expect to find in airports in western Europe first impressions are, initially, of a modern day version of Hungary far removed from the grand and imposing architecture most of us imagine when we think of the old Austro-Hungarian Empire.

But it is just that, a first impression.

We jumped on a local bus and then caught a metro (we prefer to get around that way as opposed to taking the obvious tourist transfers that are available as it gives you a better feeling of how the locals get around). But however you get into the centre of Budapest your first impressions of a sleek and minimalistic Hungary soon melt away.

As you approach the river Danube you are met, or shall I say towered over, by the grand Buda Castle on one side of the river and the even more spectacular Parliament building on the other. Certainly nothing minimalistic or understated about these two buildings thats for sure.

As many of you already probably know, Budapest was originally two separate cities Buda and Pest. In 1873 the two were joined and formed the city we know today as Budapest. The Széchenyi Chain Bridge (pictured below) is the most recognisable link between the two sides of the river, Buda and Pest.

The city is rich with history and culture from the old days of the Austro-Hungarian empire through to the soviet controlled era with a little German influence thrown in from their close relationship with them during WW2.

If you’ve planned a weekend in Budapest, or are thinking about it, the chances are that you’re already aware the city boasts a huge number of thermal baths that are heated by natural underground hot springs.

There are lots to choose from, some have outdoor baths, some have indoor baths, some have both. What seems to be the obvious choice when doing some research are the Széchenyi Thermal Baths. Sure these baths look great! I have friends who have been and said it was an amazing experience, but they are the most expensive baths to visit costing 5100 – 5600 HUF (about 17€) and I’m not sure how many locals you will find there.

If a more authentic experience is what you have in mind then I highly recommend visiting the Kiraly baths. The price is 2400 – 2700 HUF (about 8€) and is for sure a much more traditional option. They are the oldest baths in Budapest by far, with construction beginning in 1565. Full of mainly locals, we spent a very relaxing couple of hours there on our last day before our flight home. Don’t be fooled they might not be the most modern baths in Budapest but if authentic is what your looking for, then I highly recommend this place.

Of course a trip to Budapest has to involve Goulash at least once somewhere along the line. Or if you are like me, every day you are there (just to make sure I was 100% certain Goulash is amazing).

At first this might seem like a bit of a tourist trap, but honestly I would not recommend it if it wasn’t genuinely amazing. The portion pictured above was 1800 HUF (6€) and fed the two of us to the point of bursting. Definitely one you cant miss. Don’t be scared to throw your peanut shells on the floor (i’ll leave it up to you to figure out what I mean by that).

A weekend in Budapest gives you enough time to take a few hours out just to wander around some of the beautiful parks in the city.

Gellért Hill, which is a UNESCO World Heritage Site, overlooks the river Danube and gives you great panoramic views over the city itself. At the top of the hill is the Citadel and various wartime monuments. The park that is situated on the side of the hill rolls down to meet the banks of the Danube and is a great place to take a walk through. Since I was there during winter it had a mysterious atmosphere about it. There was plenty of low hanging mist and a real crisp feeling to the air that surrounded me.

The same goes for the City Park located just behind Heroes’ Square. The mist surrounding the trees in the park gave me a great opportunity to capture some very atmospheric images. 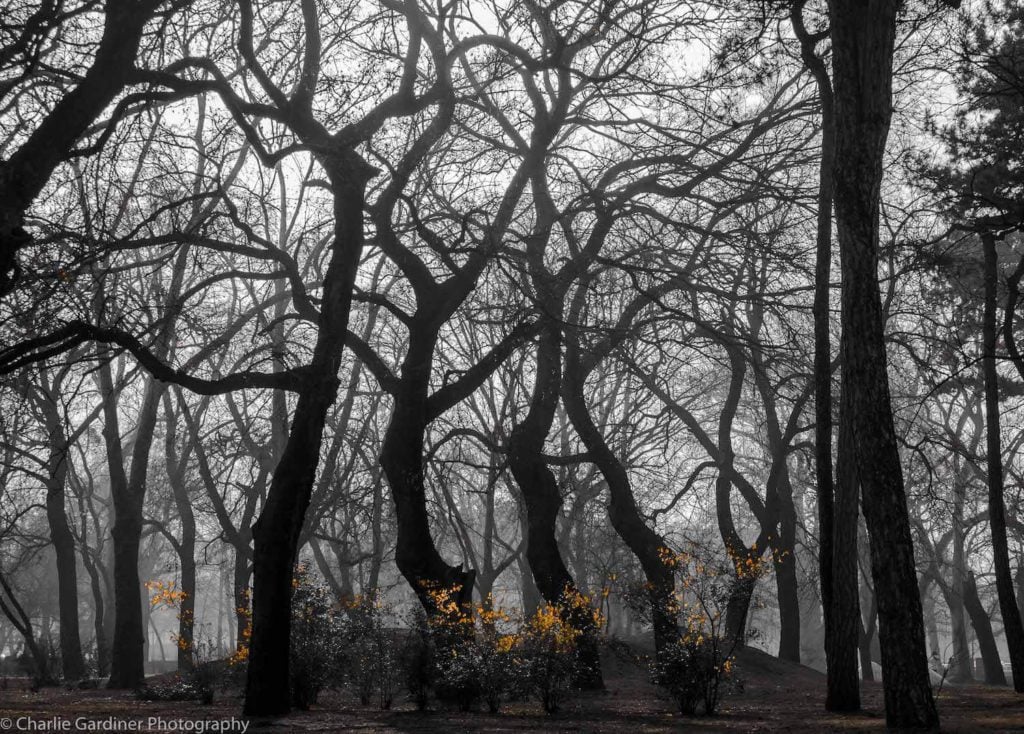 Other Places To Eat Out/Stop For Coffee & Cake

Hungarikum – Great little restaurant serving good quality Hungarian dishes. Make a reservation though it’s very popular and you might be disappointed to turn up and see the “sorry we are fully booked tonight” sign on the door (we didn’t make that mistake when we returned on the second night). Website: www.hungarikumbisztro.hu

Veggie Raw Vegan Bistro – I have to add this little cafe on the list even though I am far from vegan. The cakes were amazing and the friendliness of the staff even more impressive. I had a bit of a embarrassing moment when I smashed a rather large glass vase. Even after offering to pay for it and clean up the broken glass the waitress wouldn’t accept anything and brushed it off with a smile. Thanks for that. Website: www.veggiebisztro.hu

Puli – Amazing service from a very attentive waiter + great food, what more could you want? Oh yeah the amazing value! We tried the Goulash and it was a very very close second to the one we had in For Sale Pub. And it was only 900 HUF (3€). Website: www.pulibudapest.hu

KAHWA el Salam – A lovely little cafe on the banks of the river Danube. Great coffee in a little, well decorated cafe. Didn’t try any food but from what others were ordering it looked very good. Click here to view on Trip Advisor

One of the biggest surprises during my weekend in Budapest was the Szimpla Kert ruin pub located in the jewish quarter of the city. It was probably one of the coolest pubs I have ever been to.

If you don’t know what the ruin pubs in Budapest are check them out on google but basically they are old abandoned buildings that, over years, have been transformed into pubs. Decorated with old junk and some of the most random things you can imagine, the Szimpla Kert ruin pub was incredible.

Over 2 floors the old abandoned house, and what are presumably old bedrooms and living rooms, now host some of the strangest looking decorations and furniture you have ever seen. It’s the biggest and most well known ruin pub in Budapest but, for very obvious reasons, considered the best. CANNOT BE MISSED!

Deep fried bread covered in sour cream and cheese sound like a greasy heavy meal? Well it is… But you have to try Langos, or at least share one, while you are in Budapest. It’s a traditional Hungarian dish which is apparently most often eaten after a few beers. Get the best and cheapest ones the city has to offer from Retro Bufe a little kiosk which specializes in making them.

Finally don’t forget to check out chimney cakes but whatever you do don’t let yourself be ripped off and get one from the main tourist area as it will cost you 3 times as much as anywhere else. Look for the kiosks around the city where you can get one for 350 HUF (about 1.10€). They come in all different flavours but my favourites were the vanilla one and the cinnamon one.

Ok so thats about it for my tips on how to have a successful weekend in Budapest. Thanks for reading and check out my other travel guides for tips and info on other cities around the world!

4 thoughts on “Ruin Pubs, Thermal Baths And All The Hidden Gems: Get The Most Out Of Your Weekend In Budapest!”