The jewel in Utah’s crown…

Before taking a trip the typical thing to do is research a little bit about the area you’re going to and get a feel of what you’re going to see and do. I do this as well but I also love not having a definitive plan especially if I have a few days to explore. Once I get near my location I go to a bookstore or, in this case, a gift shop. I look around at the books and photographs to see what locations and hikes look appealing to me, find it on the map, and go. This scenario may not be the best idea for all locations so as not to miss out on something better but for specific places such as National Parks, I find it exciting and it adds a bit of spontaneity. 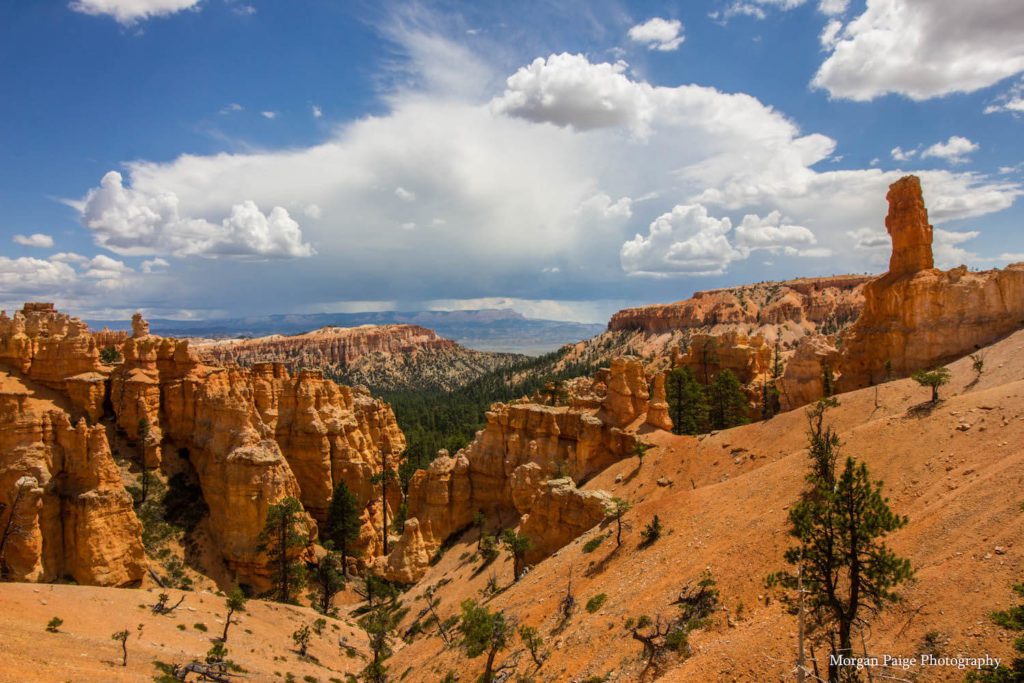 I’m currently living in Utah where it averages about 108 degrees in the summer and is extremely dry. To give you an idea of how dry it is, we recently had a fire that burnt 70,000+ acres over the time span of a month. Driving up to Bryce Canyon National Park I wasn’t sure what to expect; would it be hot and rocky like the rest of Utah I’ve seen? I imagined so. It is Southwestern Utah after all.

I was pleasantly surprised as I drove up the highway and it turned into a green density of trees and fresh mountain air. It was a 6,000 foot elevation gain which resulted in a 50 degree temperature change that morning.

Upon entering the park the first thing I see is the gift shop. I stop there to check out some hikes and look at the map that the park hands out at the gate. As well as keeping the map as my park souvenir I like to buy a sticker from each cool location I visit. Once I buy a sticker and check out some books to look at photographs and learn some history, I head out to explore. 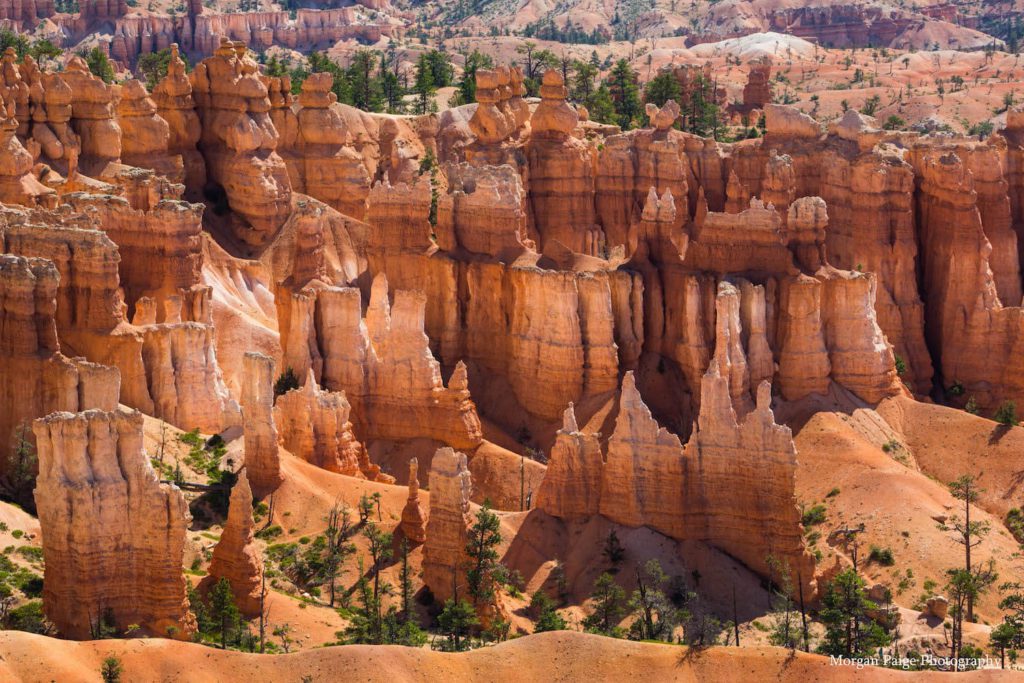 The park is filled with many types of trees and green grass which does not look anything like the typical pictures you see of Bryce Canyon. As you follow the trail it opens up to the nature made amphitheater filled with hoodoos and spires, the classic view of this park. These rock formations are up to 200 feet tall and are made by erosion due to weather, most specifically ice. The sandstone and rocks provide the colors of white, red, and orange. 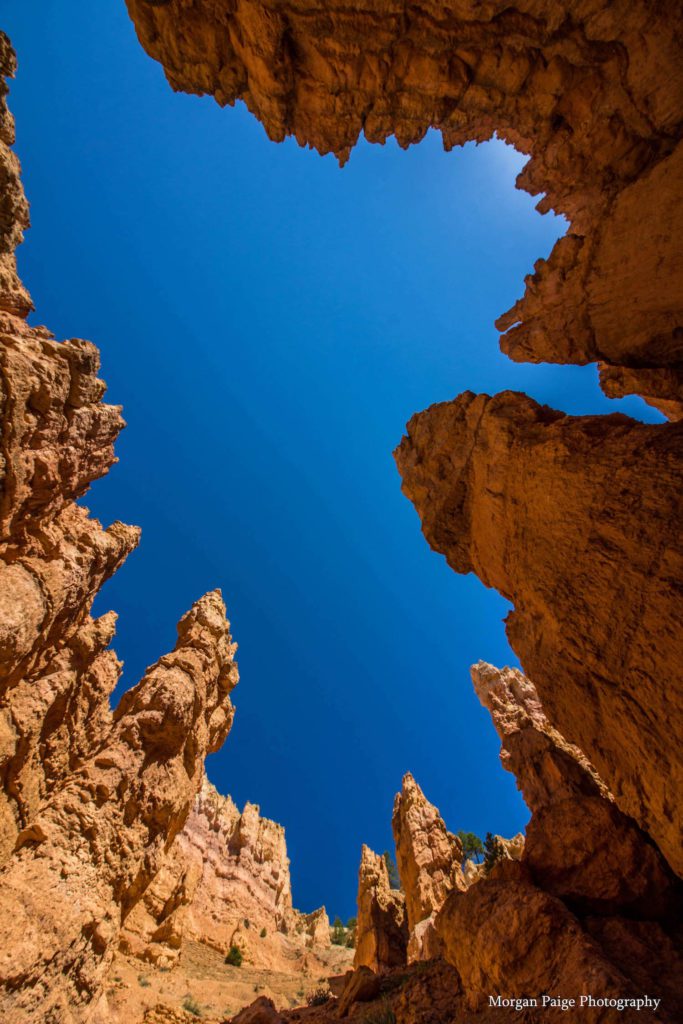 The overlook was spectacular and venturing down into the amphitheater was breathtaking. Both are equally fantastic but for their own reasons. If you ever get the chance to go I recommend that you see both to get the full effect of Bryce Canyon National Park. Hiking through the crazy rock formations was like nothing I’ve ever experienced before.

The Navajo Trail is a three mile loop that takes you down through some of the hoodoos then back up to the top of the plateau, where the overlook is. The famous Antelope Canyon can also be found in this area. This trail has a connection to the Peek-A-Boo Trail, which is another loop that is an additional three miles long. The Navajo Trail was cool to see but it was also crowded. Like all National Parks that I’ve been to the further you go the less people you see. I look at it as the first part of the trail is great for people watching and the rest of it is where you can fully enjoy nature. 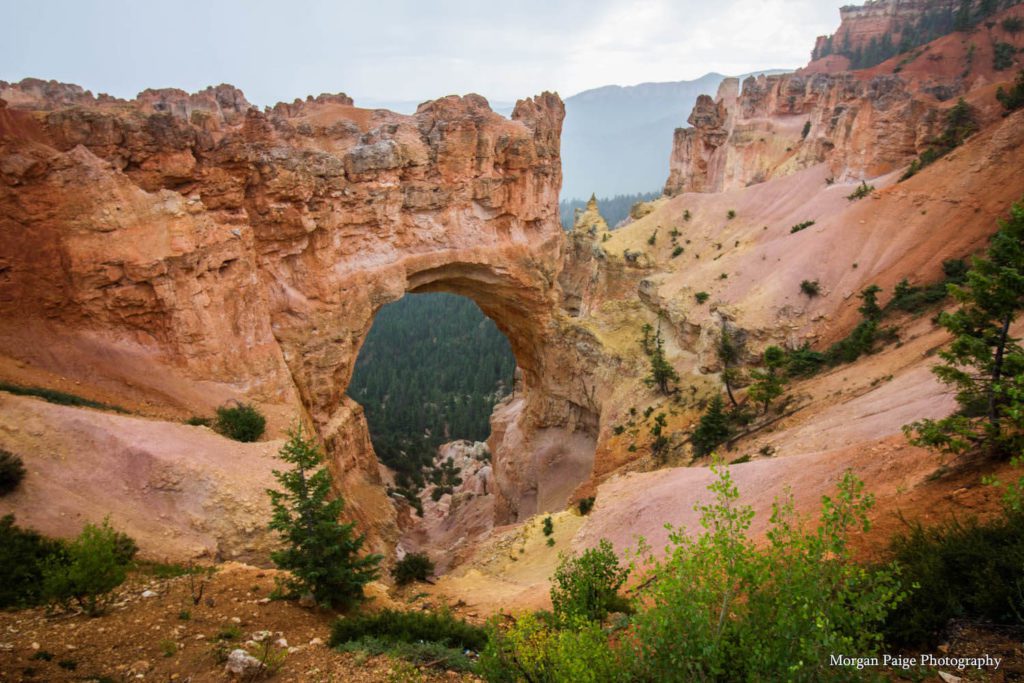 The Peek-A-Boo Trail was by far my favorite experience at Bryce Canyon. The trail weaves in and out of many different rock formations and takes you up and down many times, with a total round trip elevation gain of 1,530 feet. You get to explore Bryce Canyon up close by taking this trail, including going through a few different tunnels. In addition so seeing it up close you also get to view the canyon from many different angles and vantage points.

As I was hiking back a storm rolled through. The storm clouds made the canyon even more of a sight to see and the overlook was even more spectacular than the first time I saw it. It started down pouring as I was leaving the park, it was the first time I had seen rain in Utah since I moved there two months ago.

According to some of the history I read about, the canyon was first inhabited by the Anasazi and later on the Piaute Native Americans. In the 1850’s, Mormon pioneers explored the area and ended up settling there around the 1870’s. Among these settlers was Ebenezer and Mary Bryce, who chose to live below the amphitheater. The other settler’s would call the amphitheater “Bryce’s Canyon” which is how Bryce Canyon got it’s name.

Approximately fifty years later, in 1923, Bryce Canyon National Park was established as a National Monument by President Warren G. Harding and in 1928 it became a National Park.