The architecture in Barcelona is famous the world over. People flock here in droves normally with one word in mind, Gaudi. There’s no denying the man was a design genius, his buildings that are scattered throughout the city are truly architectural masterpieces.

You would however be forgiven for thinking that the likes of the Sagrada Familia and Park Guell are the only truly unique places to visit when in Barcelona. You might even know that Casa Batllo and Casa Mila should be on your list of must-see Gaudi creations.

But what if you wanted to dive deeper into the architecture of Barcelona? To experience unique buildings from other architects?

Then you need to read this guide, get out of the city centre and discover the influence this city has on the design of some of its buildings.

This old World War 1 era cement factory was completely remodelled when architect Ricardo Bofill, in 1973, saw the potential it had to transform into a totally unique, strange but beautiful home.

La Fábrica is still a work in progress today but the work that has been done on it to turn it into one of Barcelona’s best hidden architectural gems is quite simply mind-blowing. The building is covered in greenery, it spouts out of the old industrial chimneys symbolising Bofill’s dream of turning an unloved eye-sore that polluted the surrounding neighbourhood into a work of art.

Since La Fábrica is a home as well as a place of work, you can’t just turn up and expect to go on a tour. Tours have to be booked in advance and are normally reserved only for the press, little did we know at the time when we went to visit.

However, every cloud has a silver lining.

We were so determined to get a glimpse of this building we had heard whispers of that we decided we were going to wait for someone to walk out of the tall block of apartments next to it, go in, get to the top floor and take a look from there. 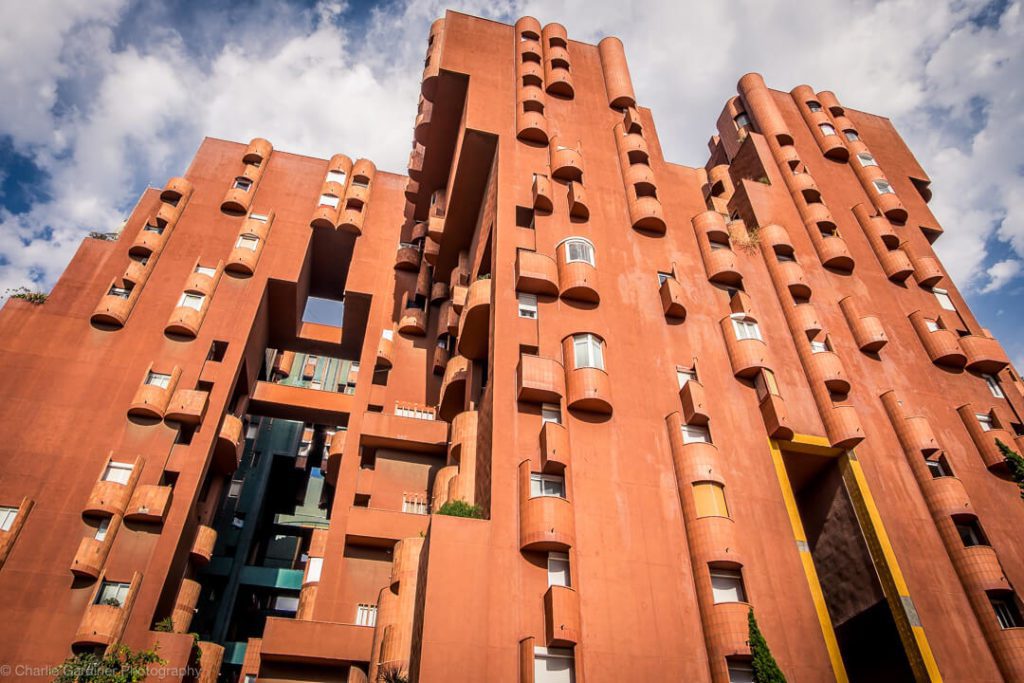 That’s how we accidentally stumbled across Edifici Walden 7..

Edifici Walden 7 – A Symphony of Symmetry

When we first entered the building and took the elevator to the 14th floor, we walked out onto what can only be described as a labyrinth in the sky. 18 individual towers make up Edifici Walden 7 and each is interconnected on every floor by a maze of walkways that feel as though they are hanging from the clouds which you can see above you as they float between the towers. 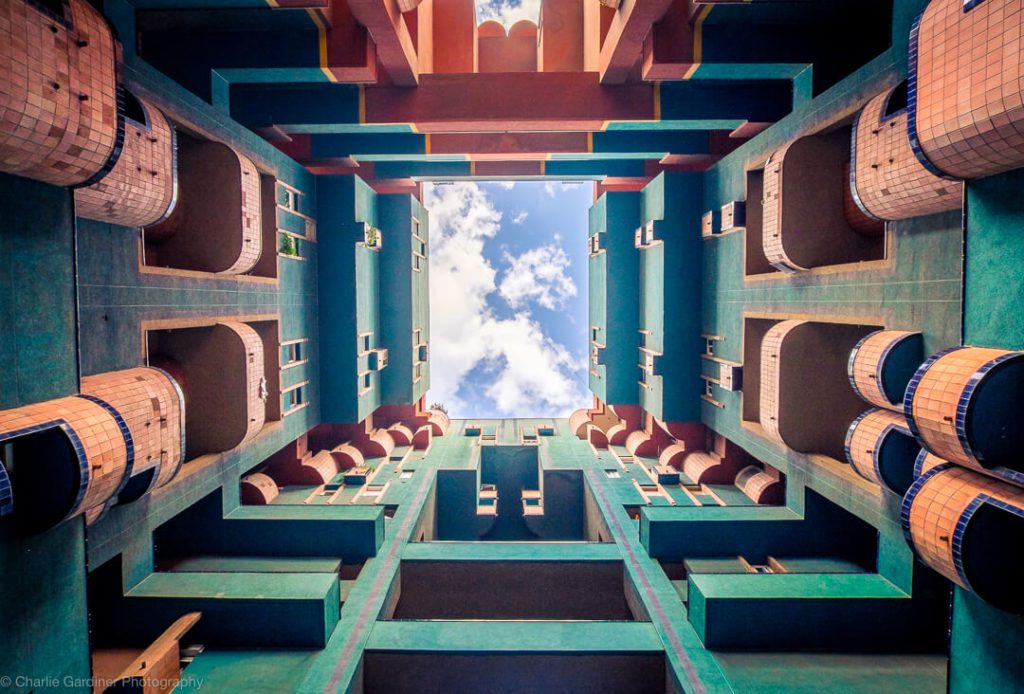 What first appeared to be a relatively innocuous building from the outside, one that we only wanted to use to realise our goal of seeing at least some of La Fábrica, soon gave us that excited feeling you get when you discover something you never expected to. The more we walked around, we couldn’t help but think this was one of those times you find what you were looking for but in a completely difference place than you thought you would.

After putting two and two together, and Googling the building, it became clear that it was another creation of Ricardo Bofill and his team. The architect responsible for its next door neighbour, La Fábrica. 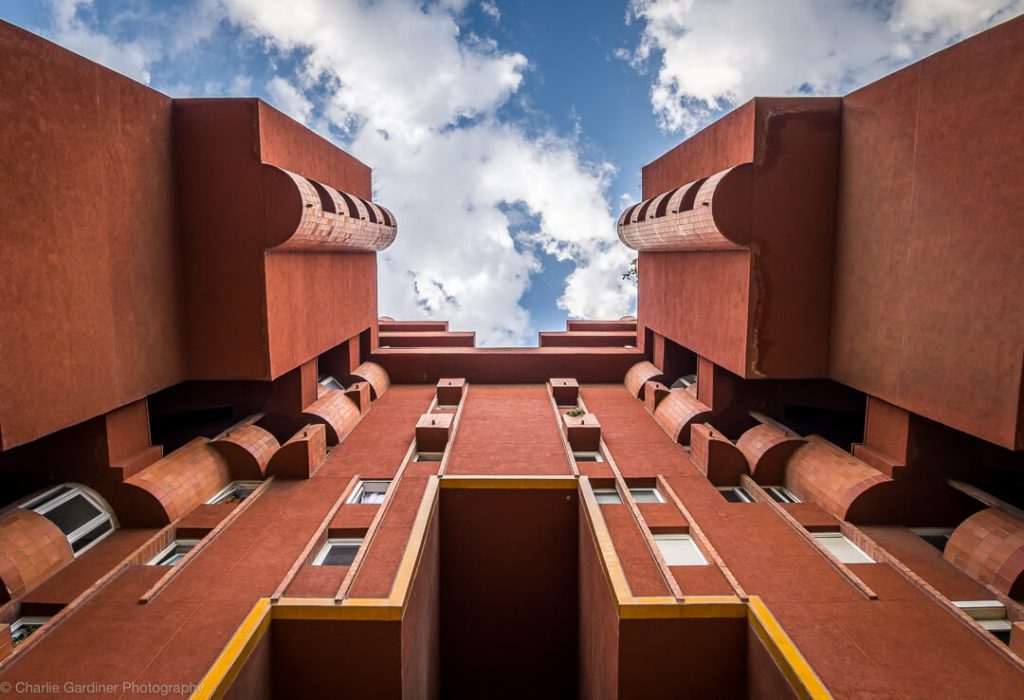 The Church of Colònia Güell

Güell.. The name sounds familiar right? Well that’s because many of the famous Antonio Gaudi’s works have that name in them. Park Güell, Palau Güell, Bodegas Güell..

Eusebi Güell was a Spanish entrepreneur who funded many of Gaudi’s projects which is why his name appears over and over again on much of the architecture in Barcelona. Colònia Güell is no different.

Yes you’re right, I did say this would be an exploration of Barcelona’s lesser known architects, but it wouldn’t be right to skip over Gaudi completely. Especially as this is one of his creations people don’t really get to hear about too often. After all, he well and truly sits on the throne when it comes to architecture in Barcelona.

Located just outside of the city, in Santa Coloma, Colònia Güell is a small village built by Eusebi Güell for factory workers after he moved his textile mill to the area in 1890. The idea was to create a village with all the necessary amenities for the workers in order to improve their quality of life.

As part of the plan, Antonio Gaudi was commissioned to design a church in the centre of the village.

The church was never fully finished (like many of Gaudi’s projects) but is one of his most historic designs. It was the first time one of his buildings featured all of his now famous architectural innovations that make a building so obviously ‘a Gaudi’. 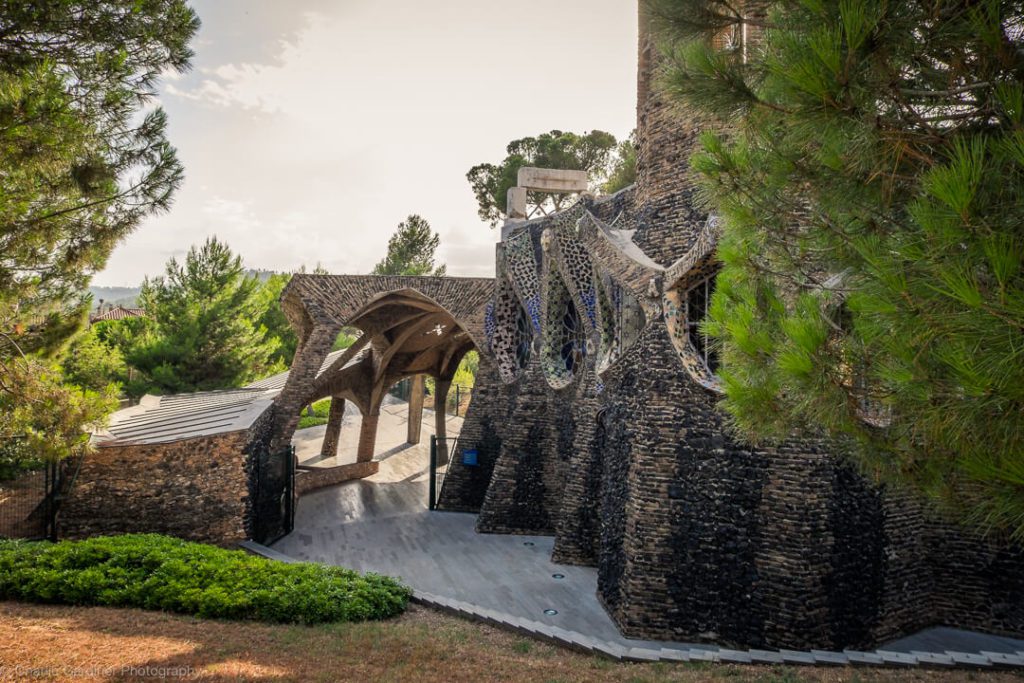 Dating back to 992AD this abandoned and dilapidated castle can be found right next to the previously mentioned church in Colònia Güell. 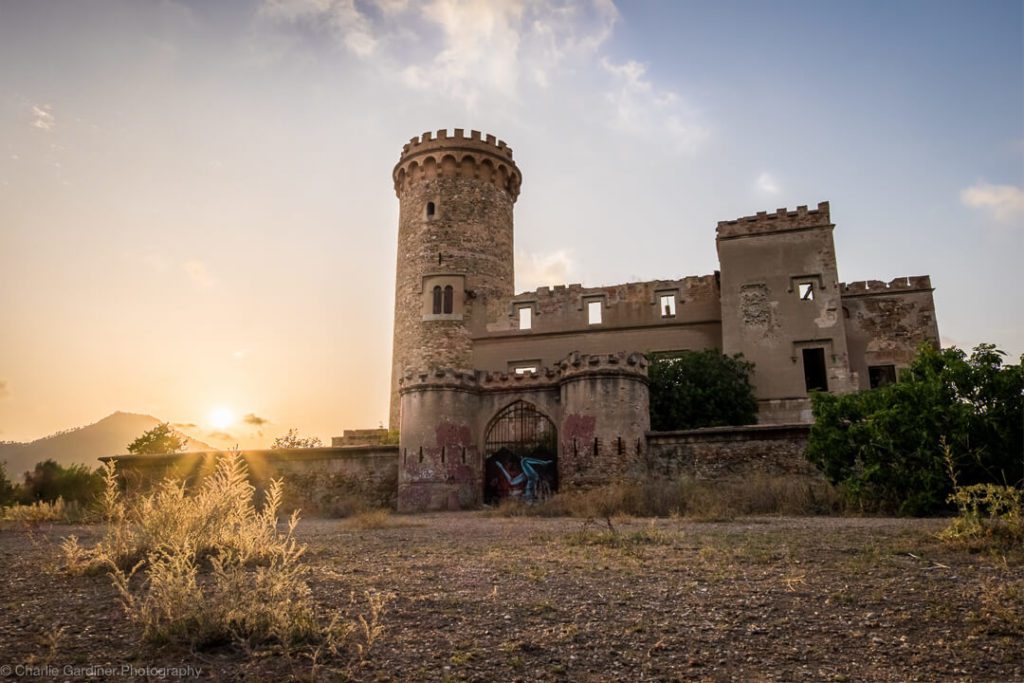 It’s said to be a breeding ground for paranormal activity by locals, but when we visited we just had fun exploring the various parts of the old castle. We didn’t see any ghosts.

Restoration work has been attempted, but ultimately the castle has been left in a state of disrepair and at the mercy of the elements. 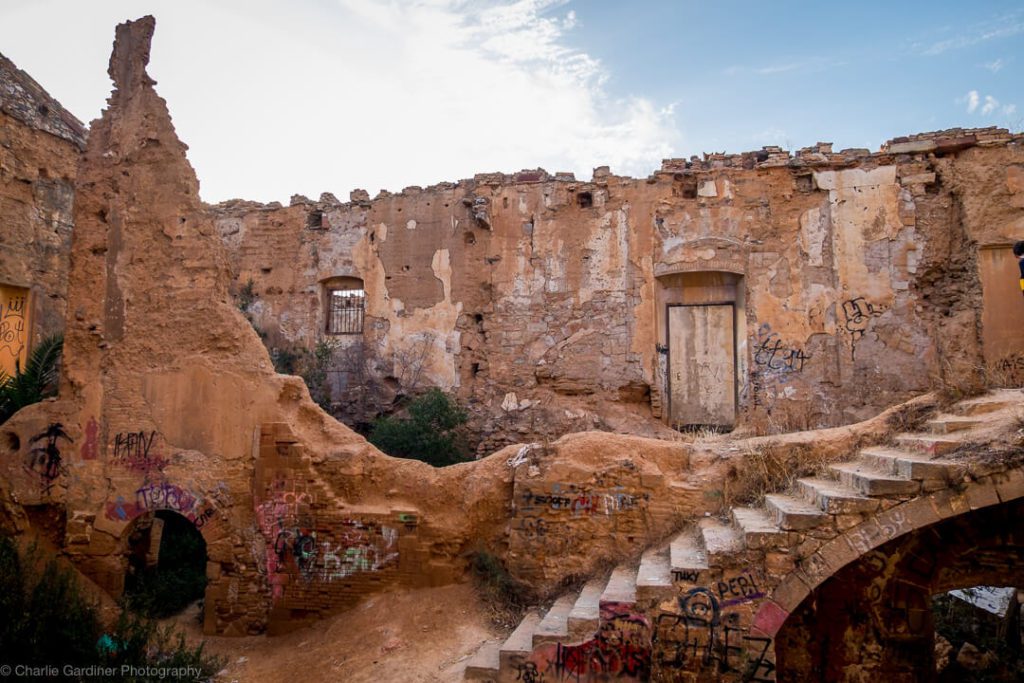 We found a hole in the wall which we climbed through and set about exploring.

It’s sad that what was obviously such a grand building in its day has been almost forgotten about, but it’s not everyday you get the chance to explore an abandoned castle that is over 1000 years old which is why it has made the list. Highly recommended to anyone looking for a way to get up close and personal with a piece of history. 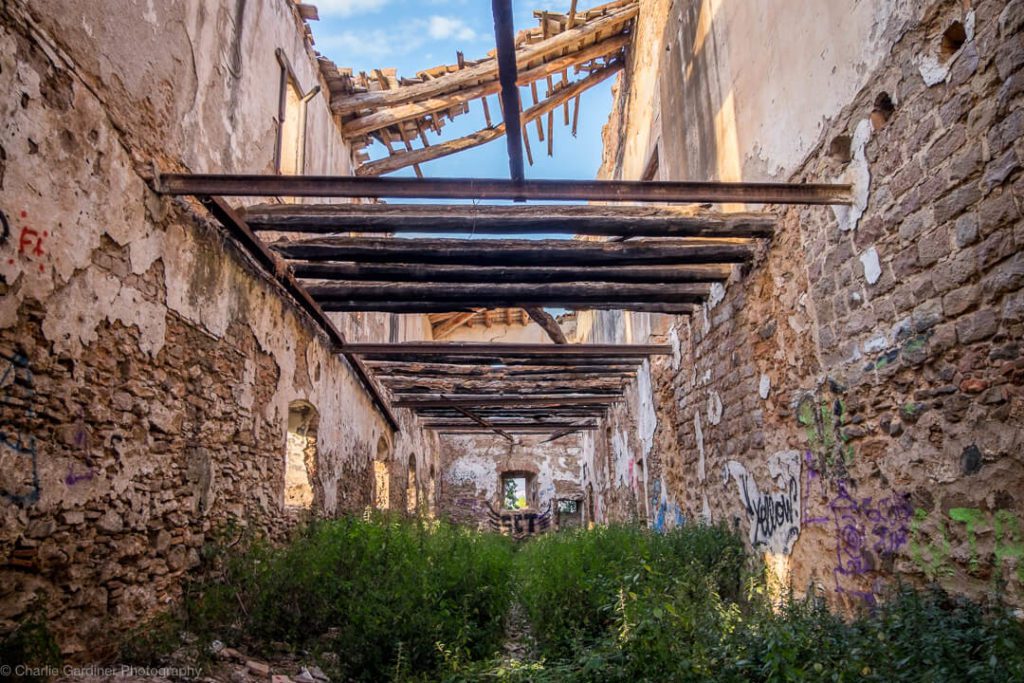 If you are looking for an alternative take on the architecture in Barcelona then it’s there to be found. Nothing will take away the magnificence from the main attractions, but if the Sagrada Familia is your starting point, then these lesser known designs and buildings are your journey going forward.

As always, thanks for reading!