When you’re looking for the best beginner mirrorless camera, things can seem a little overwhelming.

There are so many brands, makes and models to choose from.

In this article, I’m going to narrow it down to just five cameras from four brands.

The cameras on this list are all reasonably priced for beginners and are the perfect way to get into ‘real’ photography. They are all interchangeable lens cameras and have the features you need to master if you want to become a fully-fledged photographer, whether that’s as an enthusiast or a pro-in-the-making.

DISCLOSURE
This article contains links to products we love and that we may make a small commission from.

Why should you consider a mirrorless camera, especially for travel photography?

Well, primarily because of their size.

They are smaller and lighter than DSLRs which is essential for anyone who travels. If you follow travel photographers on social media, you’ll probably see that most of them are shooting on mirrorless cameras.

Not only are they smaller and lighter, but the image quality modern mirrorless camera produce is every bit as good as DSLRs. In some cases even better.

Mirrorless cameras, unsurprisingly, don’t have a mirror inside them. In DSLRs, there is a mirror mechanism that flips up every time you take a photo. The mirror basically allows you to look in the viewfinder and see through your lens. Obviously, it needs to move out of the way when taking a photo so you sensor can ‘see’ through the lens.

Mirrorless cameras don’t have this mechanism. When you look through the viewfinder of a mirrorless camera you are effectively looking at a tiny screen.

By doing away with a mechanical mirror that needs to physically flap open and closed every time you take a shot, means mirrorless cameras can shoot more images quicker.

For example, one of Canon’s top-of-the-line DSLRs, the 5D Mark IV, can shoot up to 7 fps. Whereas Sony’s top of the line mirrorless camera, the A9, can shoot up to a blistering 20 fps (that’s almost video!).

So, anyone who is interested in shooting sports or fast-paced action should really consider going mirrorless.

This one divides photographers.

Mirrorless cameras have electronic viewfinders (EVFs) which, as I mentioned earlier, are like little screens that you put your eye up to. The light coming into the lens isn’t actually being reflected up into your eye as it would be on a DSLR.

This has two benefits.

The first benefit is that you get a preview of things like exposure in real-time as you are seeing the image.

And the second is that it reduces, or totally eliminates, viewfinder blackout. Viewfinder blackout is when the screen goes black for a second while taking a photo. The blackout is caused by the mirror in a DSLR flapping up and down. When you’re shooting lots of photos in quick succession it gets very irritating.

Another advantage of mirrorless cameras is that they give you the ability to shoot in total silence.

Mirrorless cameras do still have a physical shutter that flips open and closed, but you also get the option to shoot using what is called an electronic shutter.

Using the electronic shutter mode, as well as not having the clunky mirror flapping up and down, means that each time you take a photo it’s total silent. Great for event photographers and particularly useful for weddings when you don’t want to ruin the moment by making lots of noise.

Things to look out for when choosing a beginner mirrorless camera

When you’re on the hunt for the best beginner mirrorless camera there are a few important things to look out for.

The first thing any camera should be able to do if you really want to learn and become better at photography is give you manual access to all of the settings.

In order to become a fully fledged photographer you need to practice setting things like aperture, shutter speed, ISO, white balance and focus yourself.

Different lenses yield different results. When people ask what camera you used to take a certain photo, a more appropriate question should be what lens did you use?

To get the best results in any kind of photography, you need to be able to use the right lens for the job. You should only consider mirrorless or DSLR interchangeable lens cameras as a beginner.

It might seem obvious but when you’re first starting out in photography you probably don’t want to spend thousands on a camera. Not until you know you like it anyway.

Finding the right balance between price and features is all part of the game as a beginner in photography. But that’s why I’m writing this article, to help you decide.

We’ll get onto specific cameras in a minute.

For shooting stills, in other words photography, your best option is either what’s called a full-frame or APS-C camera.

This refers to the size of the sensor. Full-frame cameras have larger sensors than APS-C cameras. The full-frame vs APS-C debate has been raging on for quite some time now but, personally, I prefer modern APS-C cameras.

Full-frame cameras tend to be more expensive and their lenses tend to be bigger and heavier than their APS-C counterparts.

Which is why for beginners, particularly beginners who are interested in travel photography, I always recommend APS-C cameras.

And if you get a good modern APS-C camera, in most circumstances there isn’t really a need to go full-frame, ever.

For me, the space and weight saving totally outweighs any benefits full-frame cameras bring to the table.

Even smaller sensors, like Micro Four Third ones, can get the job done. So long as you understand its limitations, particularly in low-light situations.

Here are the best beginner mirrorless cameras currently on the market

The following 5 cameras are the five I would recommend to beginners looking to get into photography.

The Fujifilm X-T20 is a great camera in a small body. It packs a real punch.

Fujifilm design all of their cameras in a retro style that you’d be forgiven for thinking meant they were outdated. But that couldn’t be further from the truth. 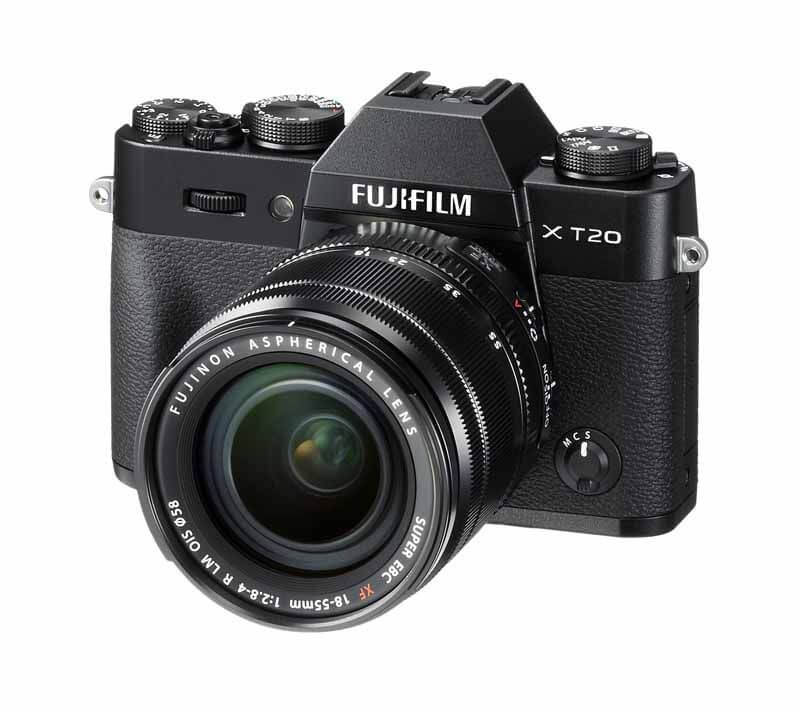 The X-T20 is built like a tank from a mixture of metal and high-quality plastics. The dials give you full control of the camera’s settings without having to dive into the menu which is why most Fuji shooters fell in love with the brand.

Fujifilm has released a newer model called the Fujifilm X-T30 but it is considerably more expensive. For the few extra megapixels and other upgrades like an improvement in eye tracking autofocus, I don’t think the extra expense is worth it for beginners.

Fujifilm hasn’t discontinued the X-T20 which makes me wonder if they think the same way I do.

Some of the Fujifilm X-T20’s important specs

The next camera on this list is another Fuji, the Fujifilm X-T100.

Although it is a step down from the X-T20 in terms of performance, its price reflects that. While the image quality isn’t as good as its cousin, the X-T20, it still has all of the features you need to master on your journey to becoming a travel photographer. 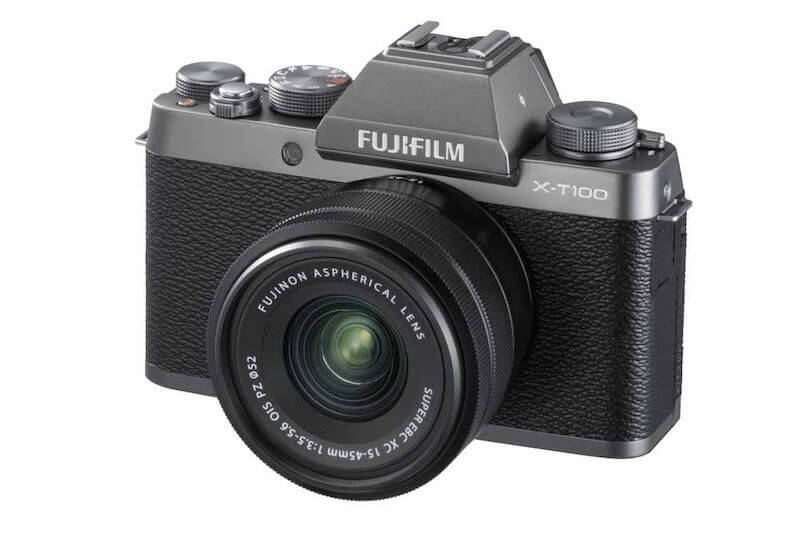 Like all Fujifilm cameras, it looks cool and its build quality is second to none.

The X-T100 does have one main feature the X-T20 doesn’t have though. A flip-out screen. Great for people who like to take selfies and vloggers.

While we’re talking about vloggers we should mention its video capabilities. Vloggers might get excited about its ability to shoot in 4K, and then quickly disappointed to find out it only does that in 15p. The 4K footage it produces is pretty much unusable in most cases. Just something worth noting.

Some of the Fujifilm X-T100’s important specs

The Canon EOS M50 is an entry-level mirrorless camera that is often described as a gateway into the world of Canon. 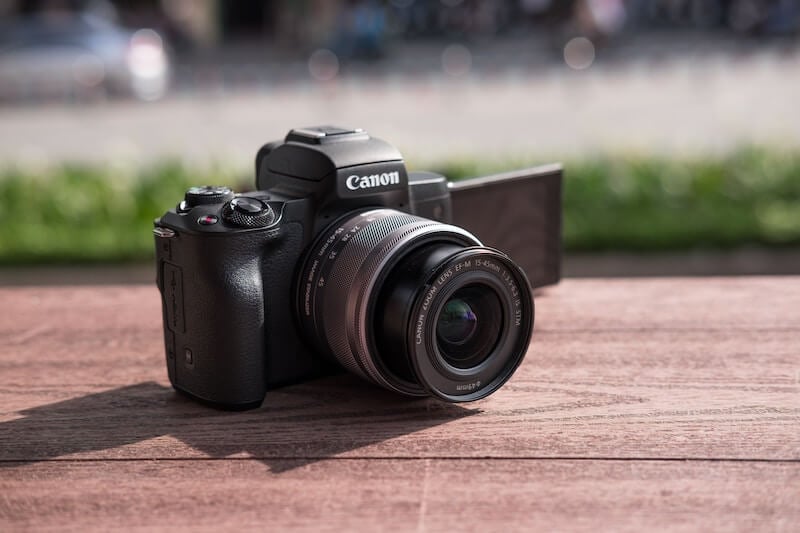 Canon does now offer full-frame mirrorless cameras but even the cheapest, the Canon EOS RP, is outside of most beginner budgets.

The build quality of the M50 is good, not quite like the Fujis, but it feels solid.

A really nice feature is the In-Body Image Stabilisation (IBIS). For a camera at this price point, it’s not often you get IBIS. That means you’ll get sharp images and smooth video footage when you shoot handheld.

Like the Fujifilm X-T100, it also has a flip out screen which, as well as having an external microphone input, is why it has become a firm favourite with YouTubers.

Some of the Canon EOS M50’s important specs

Up until recently, Sony has dominated the mirrorless camera market.

The Sony a6000 is one of their entry-level models and would make a great first camera. The quality of the images and video it produces is superb. 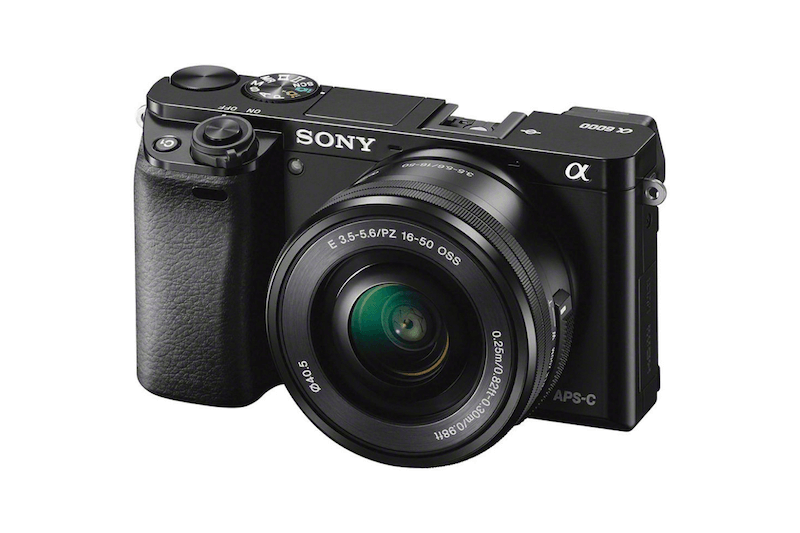 The a6000 originally came out in 2014 so it’s not a new camera, far from it. And there have been newer versions released since then. But it was a great camera in 2014, and it’s still a great camera today.

Price is a recurring theme when choosing a mirrorless camera as a beginner and the a6000 sits in the sweet spot between affordability and results.

In terms of upgradability (that’s a word right?) the Sony a6000 is on to a winner. It uses the E-mount, which means any lens that you buy for the a6000 will work on any other Sony E-mount camera.

If you buy this camera as a beginner and then decide to upgrade to one of Sony’s full-frame cameras like the beast that is the Sony A7Riii, you’ll be able to use all of the lenses you have collected.

Some of the Sony a6000’s important specs

Like the Fujis, the Olympus OM-D E-M10 Mark III goes for the retro look, and I personally love it. 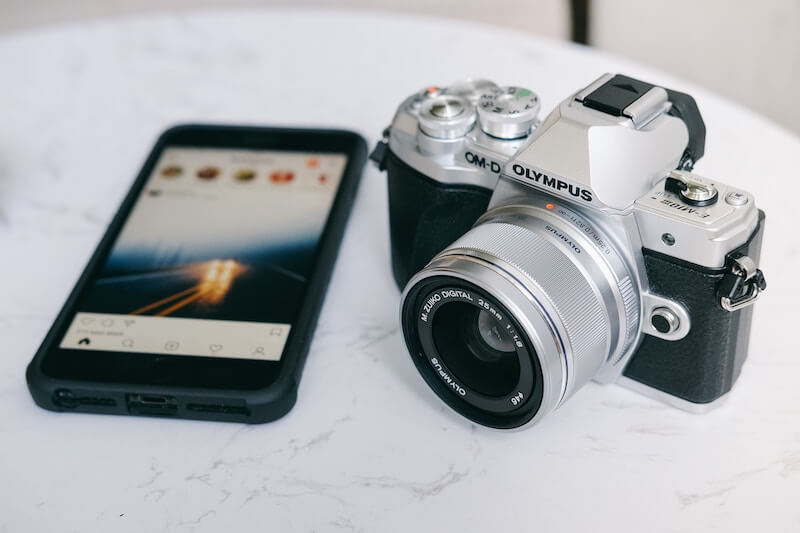 The difference between this camera and the other four cameras on this list is the sensor size. The Olympus uses a Micro Four Thirds (M4/3) sensor which is smaller than the APS-C sized sensors in the others I’ve mentioned.

The main drawback to M4/3 cameras is the reduced dynamic range meaning they are generally inferior in low-light situations.

However, the size and weight of their lenses are considerably less than other cameras. Making them great cameras for travel photography.

The Olympus also features IBIS which, for a camera in this price range, is a luxury you don’t often get.

If I had to pick just one of these as the best beginner mirrorless camera, I would choose this one…

I would personally choose the Fujifilm X-T20.

Everyone is different but in my opinion, the Fuji is the perfect balance between price and specs.

The physical dials that allow you to control its settings really help people who are learning. It allows you to take a more hands-on approach instead of spending time flicking through complicated menus.

Fujifilm is known for producing some of the best lenses on the market. When you pair Fuji glass with a camera as capable as the X-T20, you get results even pros would be happy with.

Images are tack sharp and dynamic range is great for an APS-C camera.

Being able to record 4K video internally is another powerful feature of this little package.

All-in-all, any camera on this list would make a great first mirrorless camera for beginners.

But for me, the top spot goes to the Fujifilm X-T20.