The Spanish Basque Country promises a photographic, culinary and cultural experience you can’t find anywhere else

The Spanish Basque Country, known as Euskadi in the Basque language, is a region like no other on the planet. Their language is completely unique and like nothing else. It’s the only truly unique language still spoken in Europe, its roots cannot be traced back anywhere. Basque is what linguists call a language isolate.

The region is mainly situated on Spanish sovereign territory but as it is right on the Spain/France border a small part of it overlaps into France. The Basque Country has a long history of wanting total independence from Spain and to govern themselves. In the past this has led to violence and even terrorism but today the protesting is all done through political means. The Spanish government granted the region much greater economical and political autonomy which helped to put an end to the violence.

However, today most Basques still do not consider themselves to be Spanish and amongst themselves they will often speak in the Basque language which like I’ve already said bears no resemblance at all to Spanish. All of this means traditional Basque culture has been well preserved, and today celebrated for what it is.

The people of the Basque Country were heavily oppressed under the rule of dictator Francisco Franco (1939-1975). Speaking the language and practising Basque culture were made illegal which pushed it underground. The language and traditions were practised in secret meetings where people would gather and keep their way of life alive. These meetings perfectly demonstrated the resilience of the Basque people and their determination to preserve their culture.

These secret meetings were also where a lot of traditional Basque dishes were perfected. Any local will proudly tell you all you want to know about the region and it’s history, and most importantly where to find the best food, local wine and cider the Basque Country is so famous for.

Back in October last year I took a week long road trip though the Spanish Basque Country and our first stop was the beautiful seaside town of Hondarribia. It’s a picturesque place right on the boarder of France. It’s just over the water and you could swim there easily if, for some reason, you really wanted to.

It’s a great place to stop off for lunch in one of the small waterfront restaurants, and later an afternoon walk to take some pictures but it’s not going to provide you with a weekend full of things to do. We drove to the Basque Country from Madrid which is a 5-6 hours drive so stopping off for some lunch in this beautiful town was a great way to refresh and recharge ready to carry on to our next stop, San Sebastian.

San Sebastian is one of the major stop-offs for people visiting the Basque Country. It’s popular with surfers, foodies and photographers alike. It has the second highest amount of Michelin Stars per square meter than anywhere else in the world except for Kyoto in Japan. In total the city boasts 17 Michelin Stars which includes three 3-starred restaurants. Considering there are only seven 3-starred restaurants in the whole of Spain that’s a pretty impressive feat for a relatively small city.

Basque food doesn’t have to be expensive or from a fancy restaurant though. In every bar you go to you will find a huge selection of “Pinxos” sitting on top of the bar. Pinxos are small bites, a piece of bread with something on top. It’s simple but the idea is that they only use the very best and highest quality ingredients and put together flavour combinations that will blow your mind.

Ask for a plate, help yourself and show the waiter quickly what you have taken so they know what to put on your bill. For something that sounds so simple, you won’t believe the amount of flavour they pack into a small bite. Visit a bar called La Cepa for some of the best pinxos San Sebastian has to offer (the morcilla and meat skewer in particular), and afterwards head to La Viña for a piece of their famous cheesecake. Our Airbnb host told us that trying the cheesecake in La Viña was a must and he wasn’t lying. It’s a different take on what might come to mind when you think of traditional cheesecake, but hands down the best I’ve ever had.

Another thing the Basque Country is famous for is a white wine called Txakoli and of course cider.

The Basque cider is something that I couldn’t get enough of. It’s cheap and tastes amazing, you can order it by the glass but typically you order a bottle and pour it yourself. There is a technique to it though, so maybe you should see how the pros do it first.

The otherwise flat cider takes on a completely different taste once it’s been poured “properly”.

If you’re a big foodie you’re going to love Basque food, and San Sebastian is one of the best places to get acquainted with it.

Lekeitio is another small seaside town in the Basque Country. It’s primarily a fishing town and isn’t exactly on the normal tourist route, which is one of the things that makes it so great in my opinion.

The main action, if you can call it that, seems to happen around the harbour. We visited on a Sunday so all of the boats were in and many were having some basic maintenance work done on them. The restaurants around the harbour all do a “Menu del Dia” which comprises of a starter, main meal, dessert, bread and a bottle of wine. It’s only served at lunch time (1pm-4pm-ish) and costs between €10-€15 per person. Of course the majority on offer is seafood and fish, and I would highly recommend it. We sat by the water, looking out at the boats being worked on, eating fresh fish and drinking wine until we were ready to burst for about €25 in total for 2 people. It’s hard to argue with that.

The opportunity to get some awesome photos really starts here.

Like a lot of places on the coast of the Basque Country, Mundaka is best known by surfers. Its clean rolling waves that make their way up the long bay and towards the beach makes it a perfect surfing location and you’ll often find the water full of bobbing heads waiting for the next set to roll in.

We didn’t actually head into the town itself or to the beach as the weather wasn’t being so kind to us, but we did stop off at the Santa Katalina Baseliza which is an old church in Mundaka perched on top of a cliff overlooking the Bay of Biscay.

This was probably my favourite stop on our road trip. Most of you probably haven’t heard of Gaztelugatxe before, but I’m pretty sure some of you have seen it. 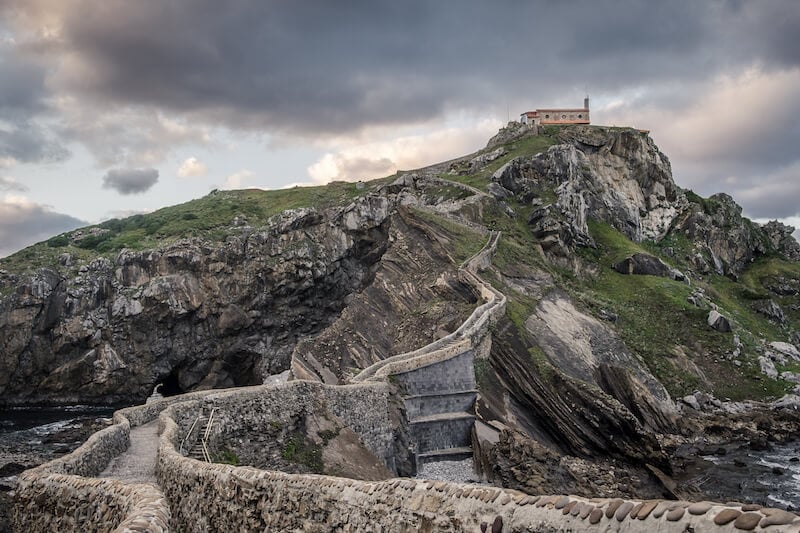 If you watch Game of Thrones you might recognise it, it’s Dragonstone. Admittedly that meant nothing to me as I’ve never seen an episode in my life but nonetheless it was still awesome and well worth the 241 steps to the top where the church is. 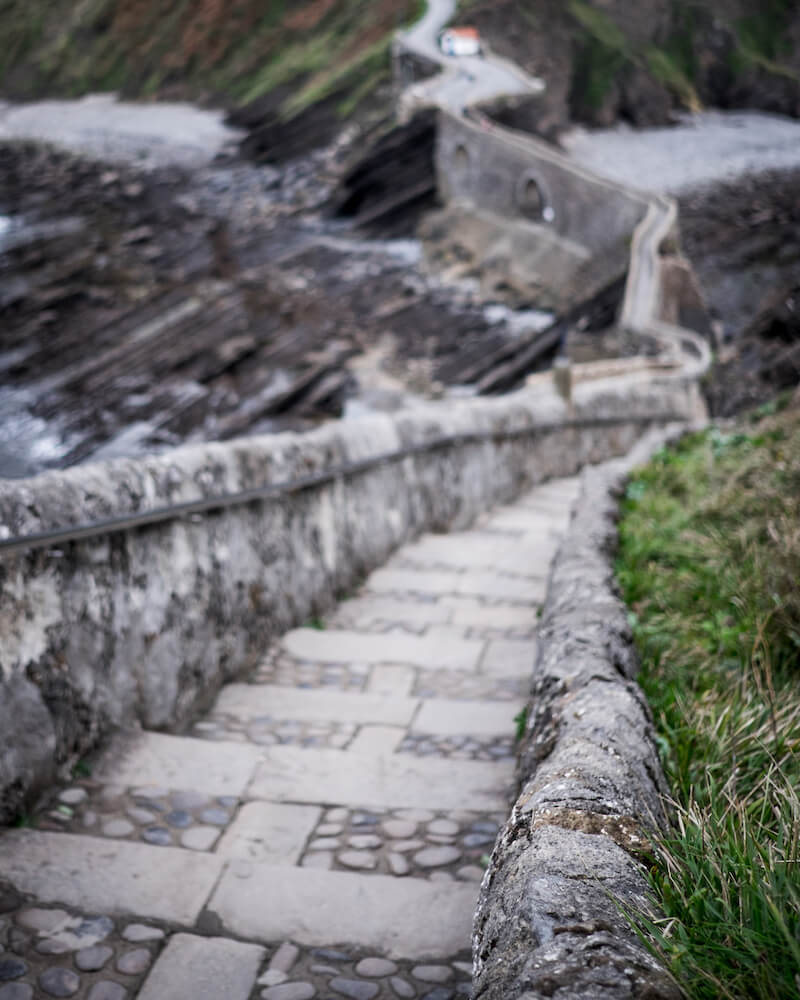 In the show they have obviously used quite a bit of CGI as it does look pretty different in real life but it’s still just as impressive. The best part is that it’s completely free all you have to do is get there and follow the path.

The church at the top has a bell with a rope hanging down on the outside of the building for anyone to ring, and the myth says that if you ring the bell 3 times and make a wish it will come true.

Gaztelugatxe is another great place to take some photos (as you can see ^^^) just don’t get caught up at the top after sunset like we did. It’s a lot of steps back down in the dark. There are lights along the path but of course they weren’t working when we were there…

The last place on this list has to be Bilbao. It’s the largest city in the Basque Country and is often seen as the capital of the region. It’s an industrial city that since 1997, when the world famous Guggenheim Museum opened, has undergone a transformation into a centre for art and culture.

Bilbao is full of great bars and restaurants just like San Sebastian is and has a lively nightlife scene. There is a big student population which adds to the energy of the city. Con B de Bilbao is a great bar with great pinxos that are maybe a little more sophisticated than other places, but not too expensive.

One of the best things to do in the Basque Country is visit a cider house for dinner. You’ll have to travel outside of the city to find a real authentic one but these old rustic restaurants are worth the visit.

You have to be a real meat eater to enjoy it. Traditionally you get served a set menu of salted cod omelette to start, a huge lump of steak for the main, local cheese and walnuts for dessert and of course cider.

As much cider as you can drink.

They give you a glass and let you loose on the 15,000 litre wooden barrels to fill up as many times as you like. The whole evening takes a good few hours to get through and afterwards you will be ready for bed so don’t make any plans. Everyone sits around big wooden tables together so you’ll likely make some new friends in the process.

The Spanish Basque Country is one of the most beautiful places in Europe, the people are warm and inviting and the food is to die for. Nothing can quite compare to it. If you’re considering it then my advice is to just do it. Throw away all of your preconceived ideas of what Spain is because this part of Spain is totally different. Like I said before, it’s totally unique and somewhere everyone should have on their bucket list.