Because we spend most of our time in the mountains and traveling to see more mountains, my wife and I decided to spend our honeymoon on a beach.

We tossed around a few ideas and decided on Hawaii. It was an easy choice because neither of us had been there before and everything we had seen and heard about it sounded like it’d be a great place to go (and there are mountains; best of both worlds). But to which island? We researched and talked about the different ones and Kauai was the winner! Kauai is called the Garden Isle and is the more nature filled, less touristy island of Hawaii so it was an obvious choice for us.

Flying into the airport the views are amazing; the water of the Pacific Ocean is a deep blue with hints of turquoise and the island is so green and lush. The first thing we were greeted with coming out of the airport was a warm, tropical air with palm trees, flowers, and lots of wild chickens. Yes, wild chickens. They were everywhere! 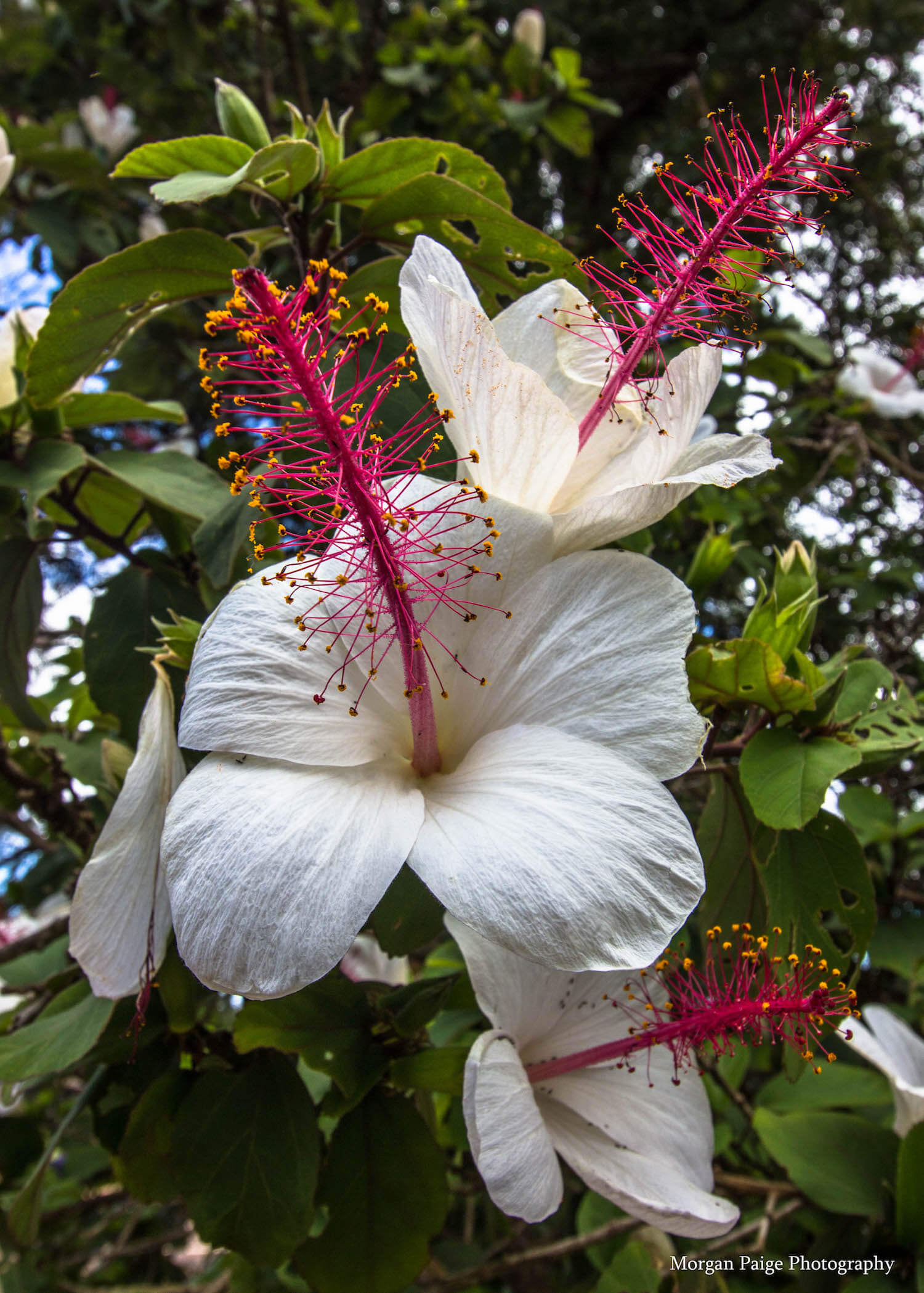 Having six days on the island was a good amount of time to see pretty much everything. We made the most of our time by exploring as much as possible as well as making time to relax on the beach. I’m a little crazy and get antsy if we sit around too much in a new place so the Island was a perfect mixture of mountains and beaches, activities and just hanging out.

Our mornings started out by watching the sunrise with a beachfront breakfast. With every entree they brought us banana macadamia nut muffins and pog juice. Pog juice is a mix of passion fruit, guava, and oranges. All the food we had was so amazing and fresh! We ate a lot of fresh fruit and pulled pork. 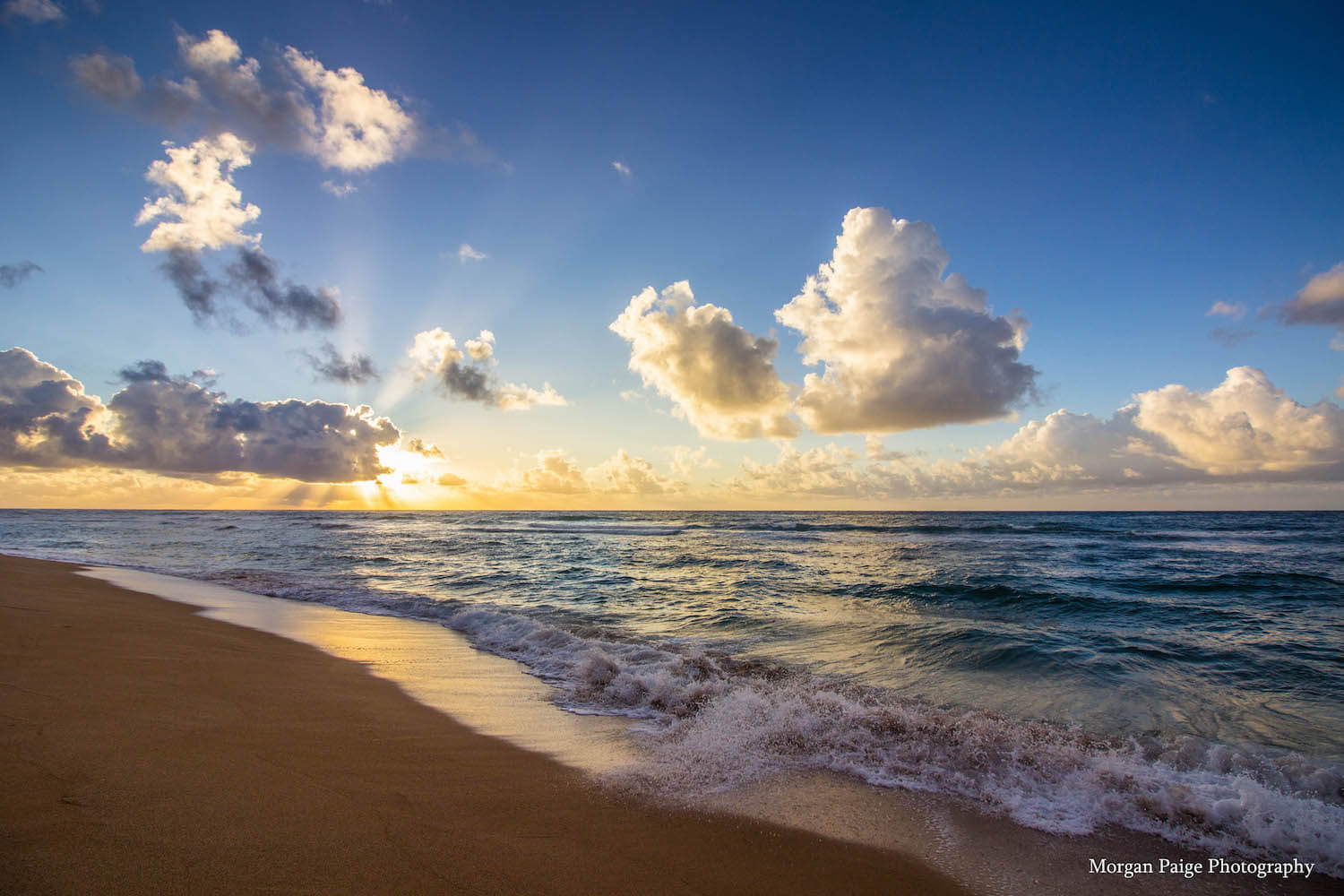 We went zip-lining with a company called Just Live! Zip-lining. Our tour guide was a 7th generation Hawaiian who told us a lot about the history of the area as well as how life is there today. It’s quite expensive to live in Hawaii so he explained to us that you basically either have to have two jobs to survive or learn to live partially off the land. Because there are no predatory animals in Hawaii hunting is strongly encouraged year round. Derrick, our guide, told us how he goes hunting for wild goats every weekend. He and his wife make goat stew and that’s what his family lives off of until the next weekend when he goes hunting again. There are also wild boar that people hunt which is why pulled pork is so popular. You may be thinking what about the chickens? Don’t people eat those? They and their eggs are not edible because they’re too lean so their meat is stringy and infested with parasites. It sounds disgusting since you see them everywhere but as long as you don’t eat them then seeing them is just like seeing any other bird, just a little bit noisier. 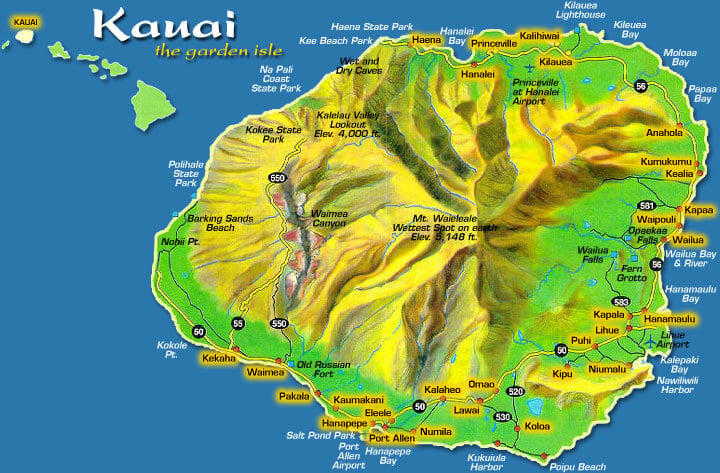 Two highways connect to make a U shape around the island going from the Kekeha Beach and ending at Ke’e Beach, about a two hour drive one way. With the windows down we cruised along the highway as far as it went, listening to a local hawaiian radio station (their music sounds like raggae). We saw many gorgeous views such as beaches, farmland, and a diverse mixture of trees ranging from pine trees to Indonesian Albizias, as well as many different kinds of colorful flowers. 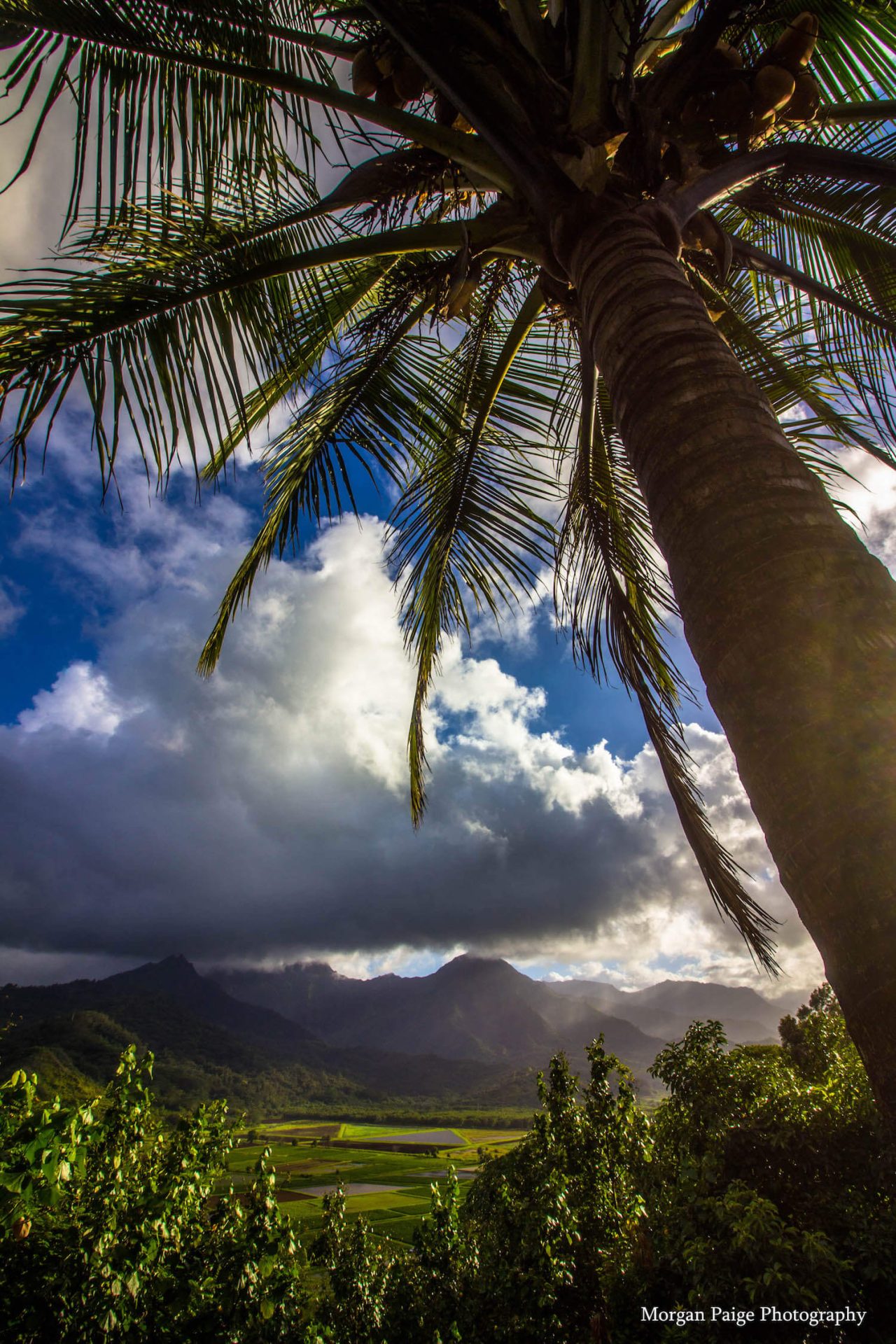 The remaining part of the island’s coast is inaccessible by car as there aren’t any roads. From here, at Ke’e Beach, is the trailhead to the Kalalau Trail which takes you 11 miles along the North shore of the island. We only hiked a very short distance on this trail up to a lookout. I’d love to do this hike one day but since it was our honeymoon I promised I wouldn’t make my wife go on any excruciating or long hikes. There’s an additional 14 miles of the coastline between the end of the Kalalau trail and Kekeha Beach which is typically explored by kayak. 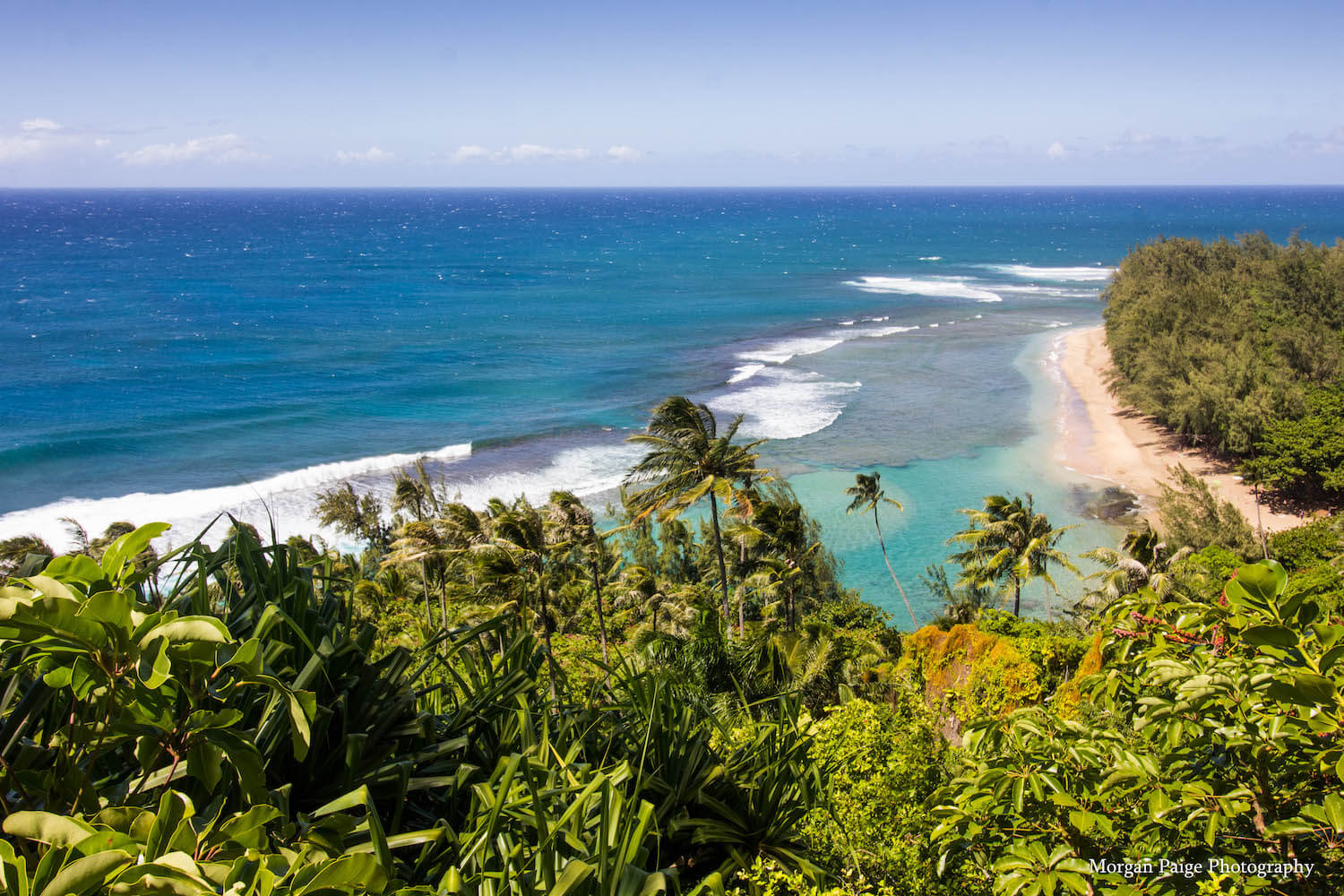 The North Shore is where the Napali Coast is which we did get to experience even though we didn’t do the hike. In addition to hiking there are two other ways to see this part of the island which is either by helicopter or by boat. We took a sunset dinner cruise on a charter boat (with Holo Holo Charters) that went along the Napali Coast. It was amazing! The captain and his crew were fantastic and told us all about the history of Hawaii as well as the legends. Napali means “many cliffs” which is a very accurate name. These cliffs are 4,000 ft high above the Pacific Ocean with many waterfalls, sea caves, and beaches. Because it’s not easily accessible it’s extremely excluded so you really feel like you’re exploring an uninhabited island. 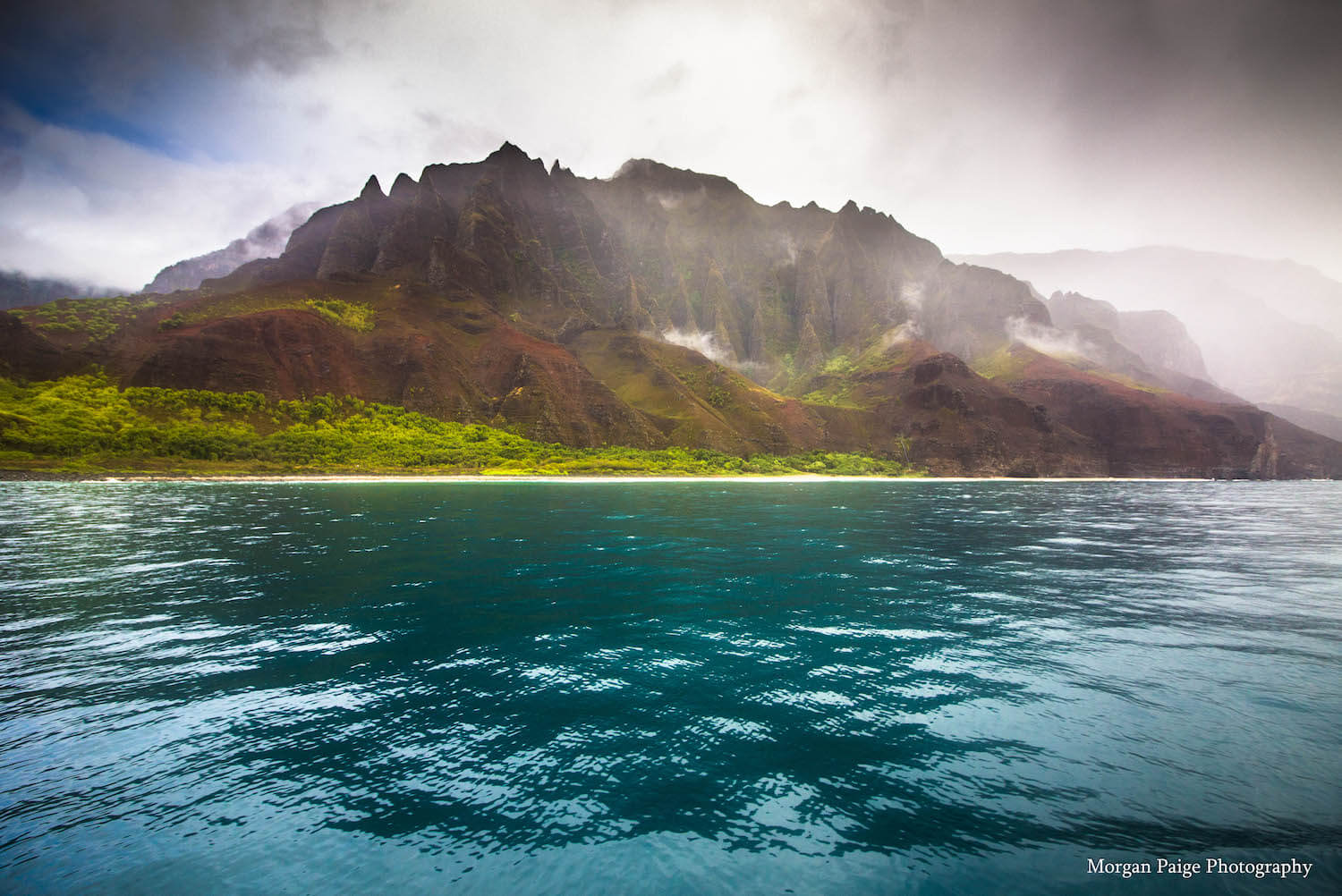 Speaking of extremely secluded, off in the distance we could see a Hawaiian Island called Niihaua. Also known as the Forbidden Island because it’s a privately owned island inhabited by approximately 170 Hawaiians living more like their ancestors than the modern day society. Their primary language is Hawaiian whereas English is the the primary language for the other islands. Definitely research this island a bit more if you think it’s a cool as I do! 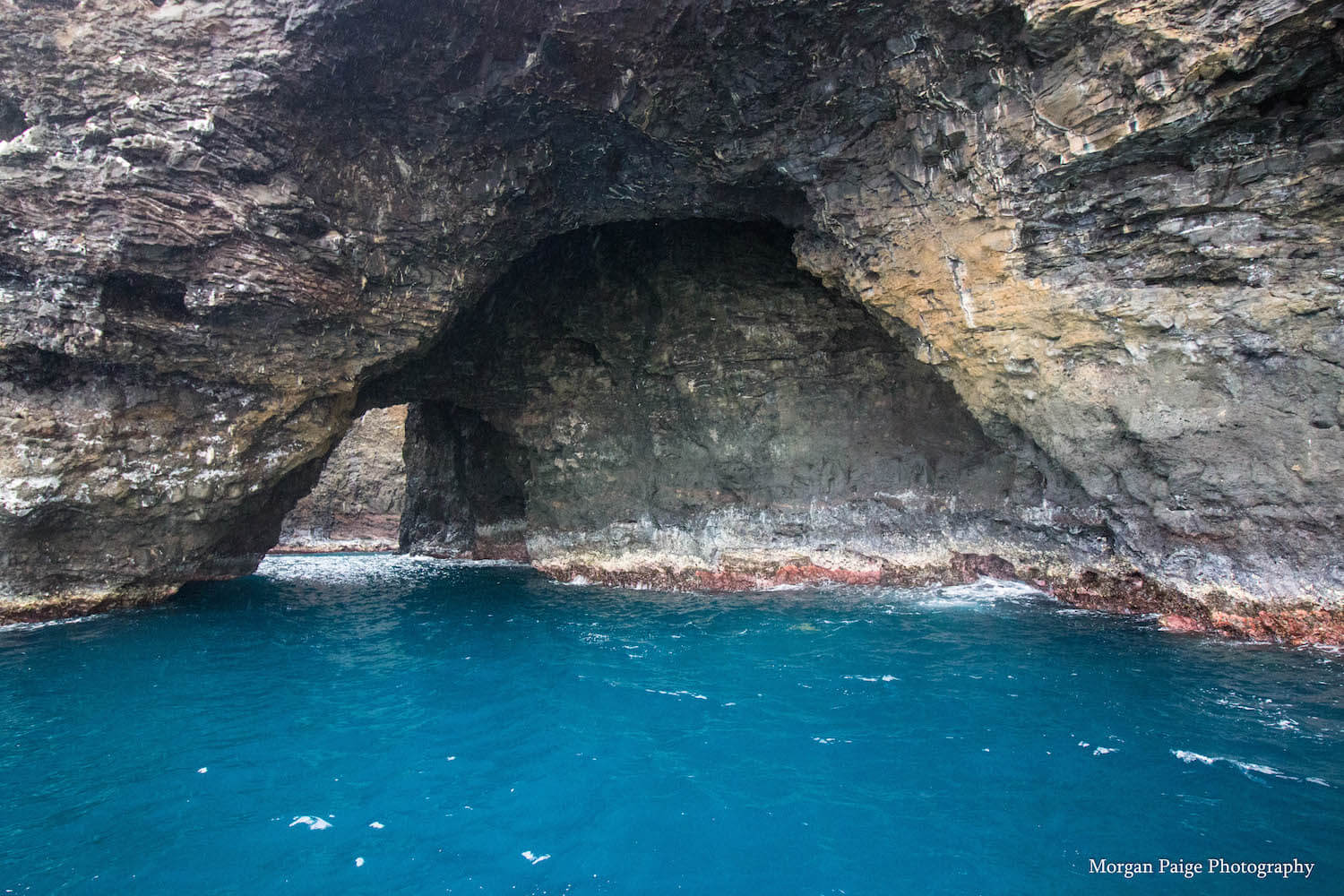 Mount Wai’ale’ale is one of the wettest spots in the world (average of 460inches of rainfall a year) which is how the valleys and canyons eroded and also why there are so many waterfalls in Kauai. From this mountain flows the Wailua River 20 miles down into the ocean. We canoed up part of this river to an extremely gorgeous hiking trail. It took us through all sorts of different trees and wildflowers and ended at the Ulueha waterfall (also known as Secret Falls) which we swam under. 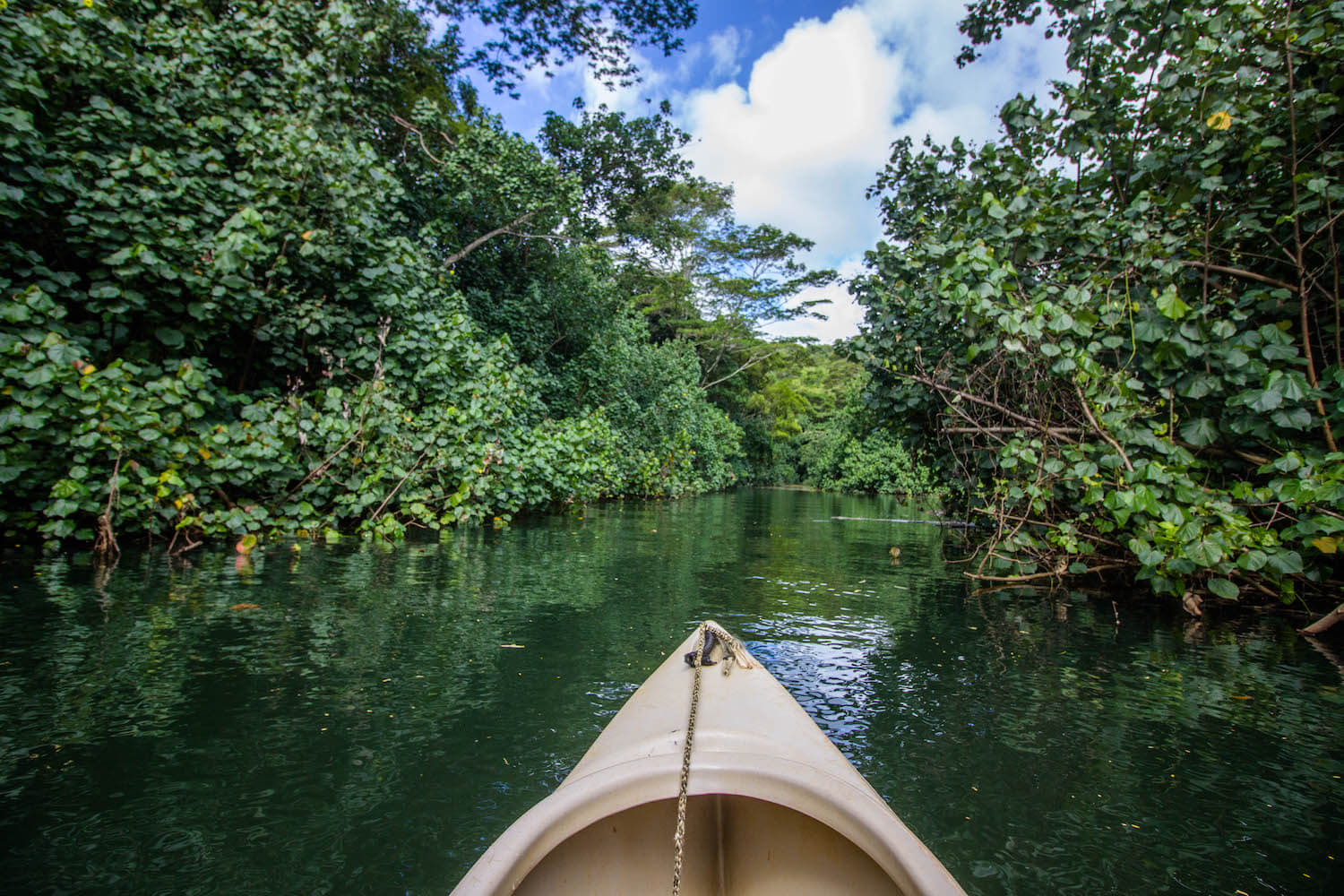 The west side of Kauai is a lot more dry than the rest of the island. Driving there it went from the tropical feel full of trees and gardens, past a coffee farm, and to a brown open area. It’s worth checking out though because if you continue on you’ll climb higher in elevation with great views over looking the ocean and end up at Waimea Canyon. They call this the Grand Canyon of the Pacific. We saw quite a few mountain goats off in the distance as well as some feral cats. 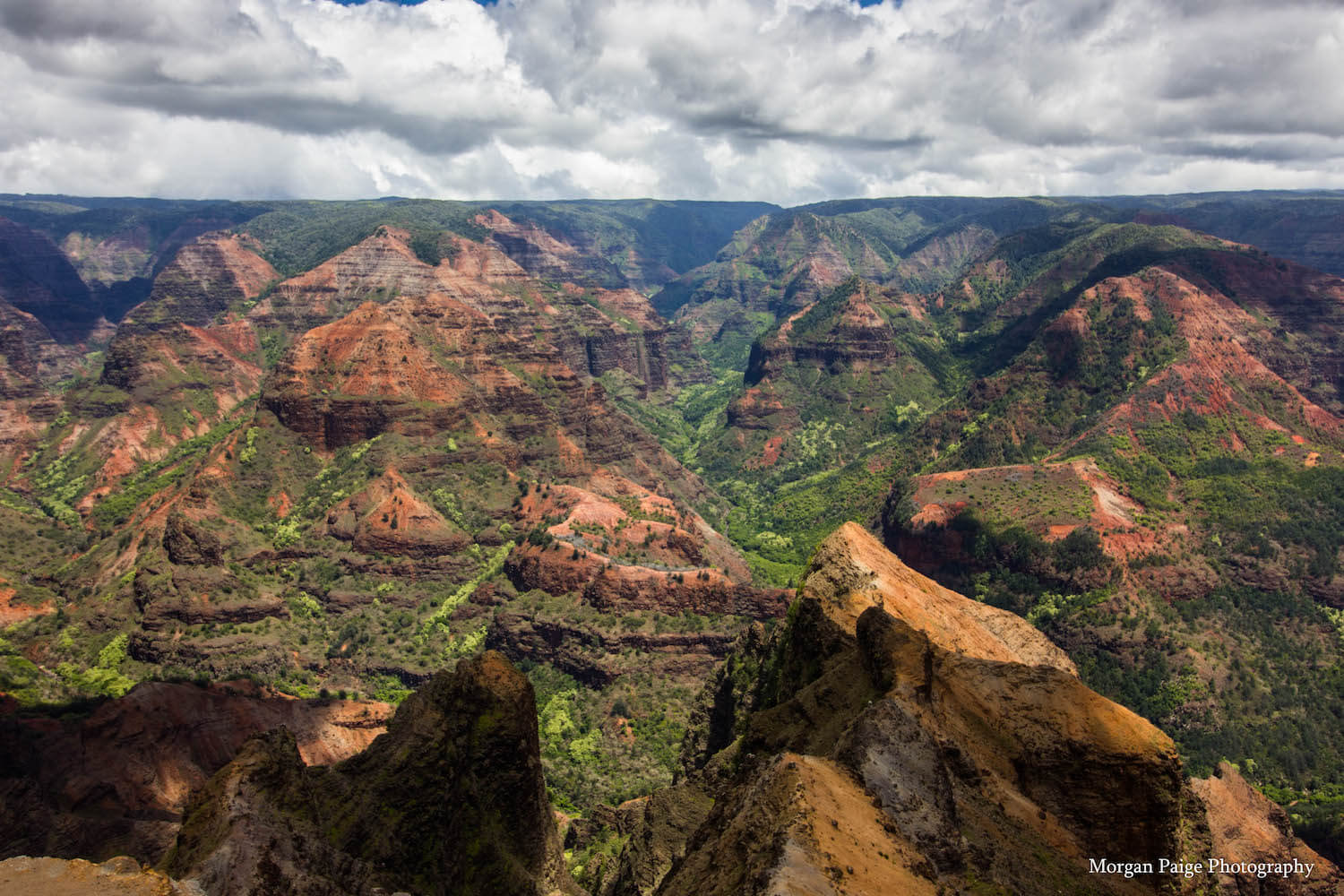 There were many stray cats around the island, most of which seemed well fed and friendly. Up by the canyon though they were definitely more wild and not tame at all. I read that there are approximately 20,000 stray cats there. I couldn’t find a reason but I wonder if it’s because of the same reason why there are so many wild chickens.

The story behind the chickens is that a hurricane came through in 1992 that blew open chicken coops which resulted in the chickens running away. With no way of being able to round them all up again, the chickens continued to breed and now inhabit the whole island. They’re along hiking trails, near waterfalls, at the beach, around buildings, everywhere. Some people find it annoying because they crow randomly throughout the day and night but I thought it was pretty cool since it was different and added to the Hawaiian experience. The chickens do some good though, since it’s a tropical place there are bugs and they eat a lot of those. 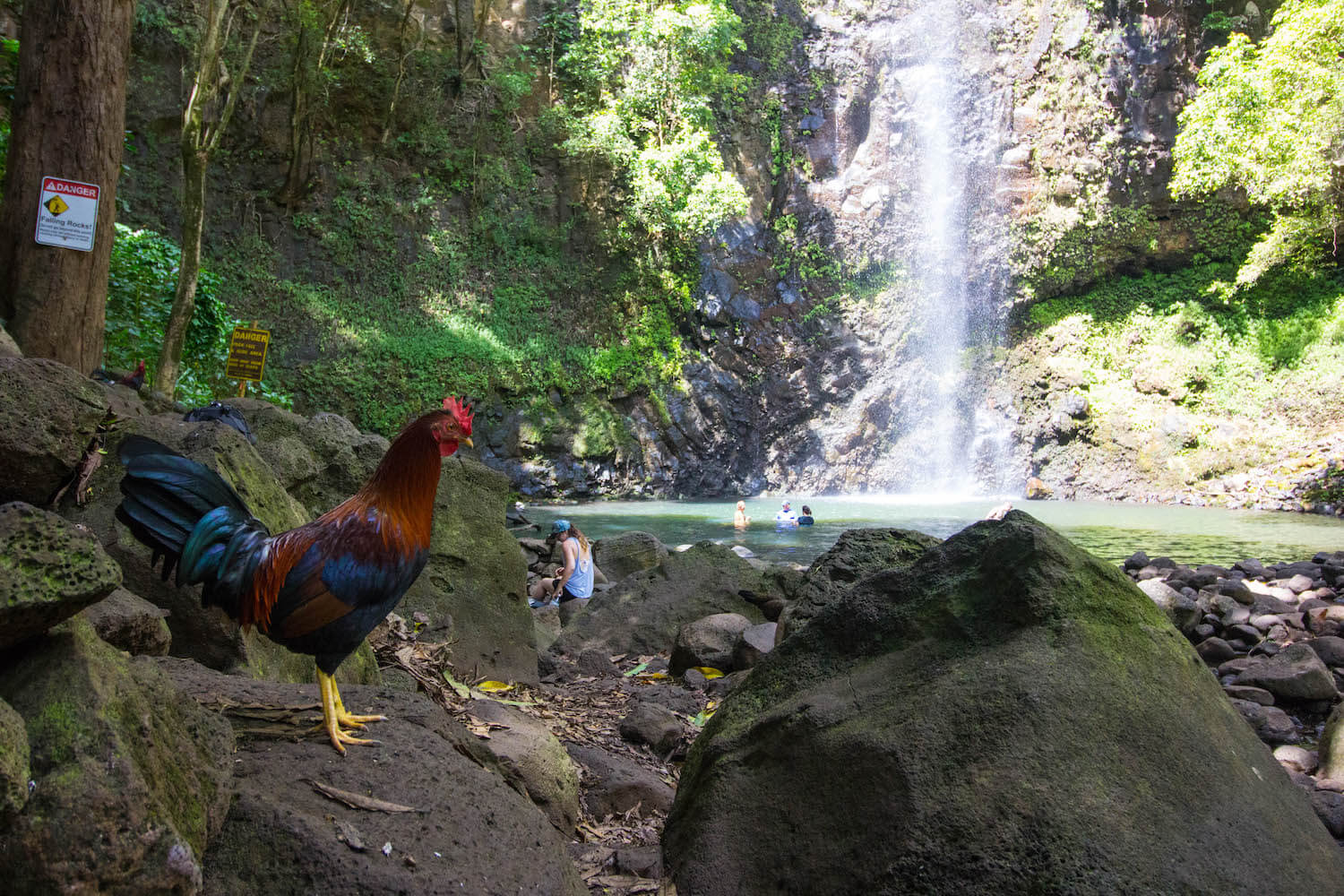 The beaches around there are full of all different kinds of sea life such as tropical fish, sea turtles, sharks, monk seals, and further out there are humpback whales. This makes for great snorkeling! We were fortunate enough to find a few sea turtles and swim with them. They were very relaxed and didn’t care about us at all, they would just feed off the bottom of the ocean and go up for air occasionally. This was one of the highlights of our trip!

A local told us about a place called the Tunnel’s where you can snorkel at. He said you look down into lava tubes and underwater caverns where you can usually spot hammerhead sharks. Obviously there can be sharks anywhere in the ocean but we chose not to swim here. It sounds like a cool spot to check out if you’re braver than we are! It’s also the beach where the professional surfer Bethany Hamilton was attacked.

We went to a Luau put on by the Smith’s Family. They do a traditional pig roast by burying the pig in an earthen imu oven and roast it for eight hours. They then serve it with many other Hawaiian foods such as poi (kind of a dipping “sauce” made from taro root. Thicker than a typical sauce), pineapple bread, and Haupi (coconut milk pudding). The pulled pork all over Hawaii is amazing but this was hands down the best pulled pork we’ve ever had! Along with dinner there was hula dancing as well as a show they put on demonstrating to us cultural dances from their ancestors.

One of the most unique beaches we explored is called Glass Beach which is in an industrial area. A lot of glass and junk gets washed ashore here so the sand is covered with tiny pieces of glass that have been smoothed over from the sea. Most of the junk is rusted car and boat parts that companies have sunk or thrown into the ocean (sometimes they do this to create reefs). It may not sound very appealing but it was cool to see. 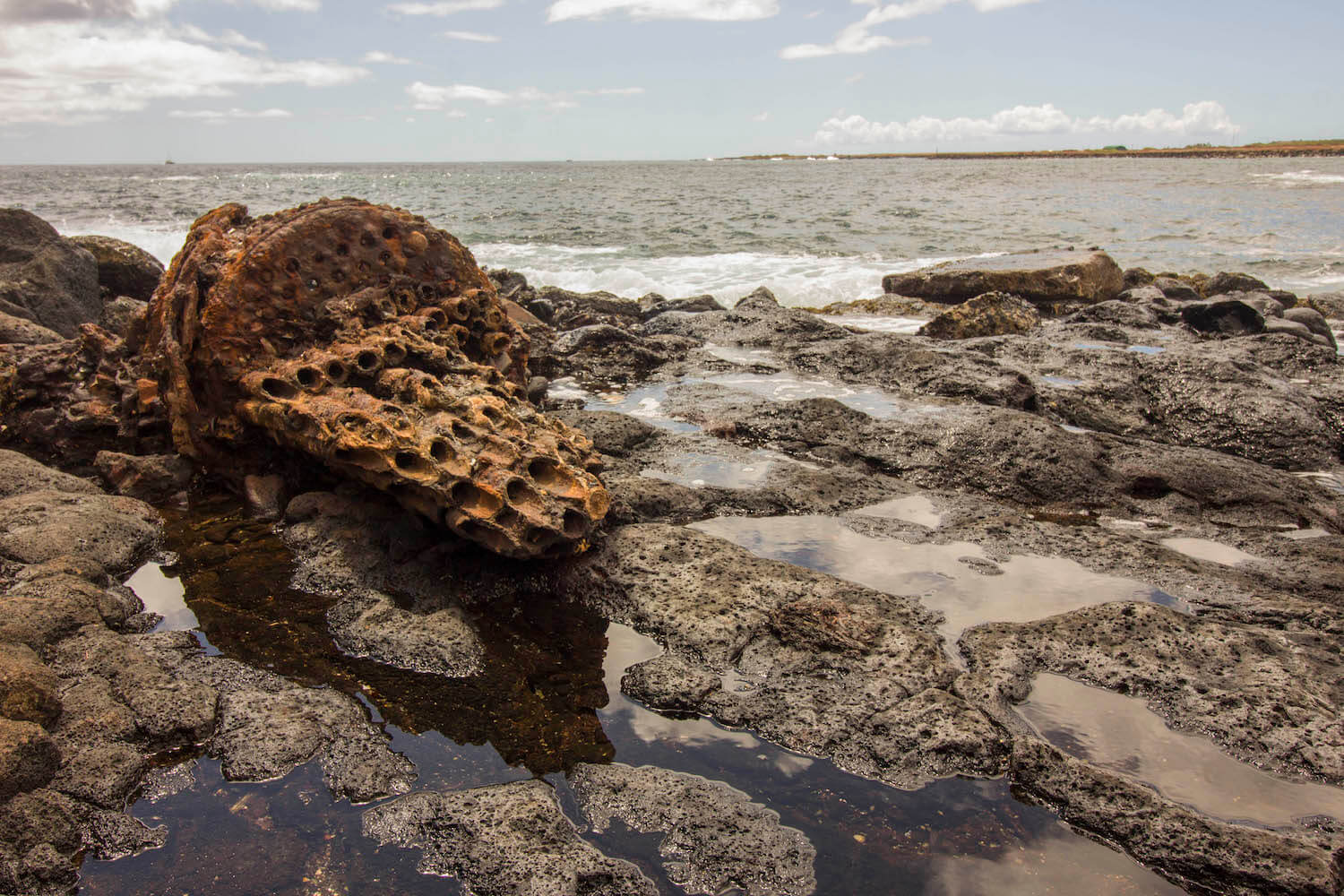 Up the cliff from this beach is a cemetery from the 1900’s. A woman named Debrah Davis just discovered it in 2013 and cleared the 3.5 acre cemetery mostly on her own with a sikle. This is the McBryde Sugar Company cemetery that is filled with graves of the Japanese and Chinese workers and their families. 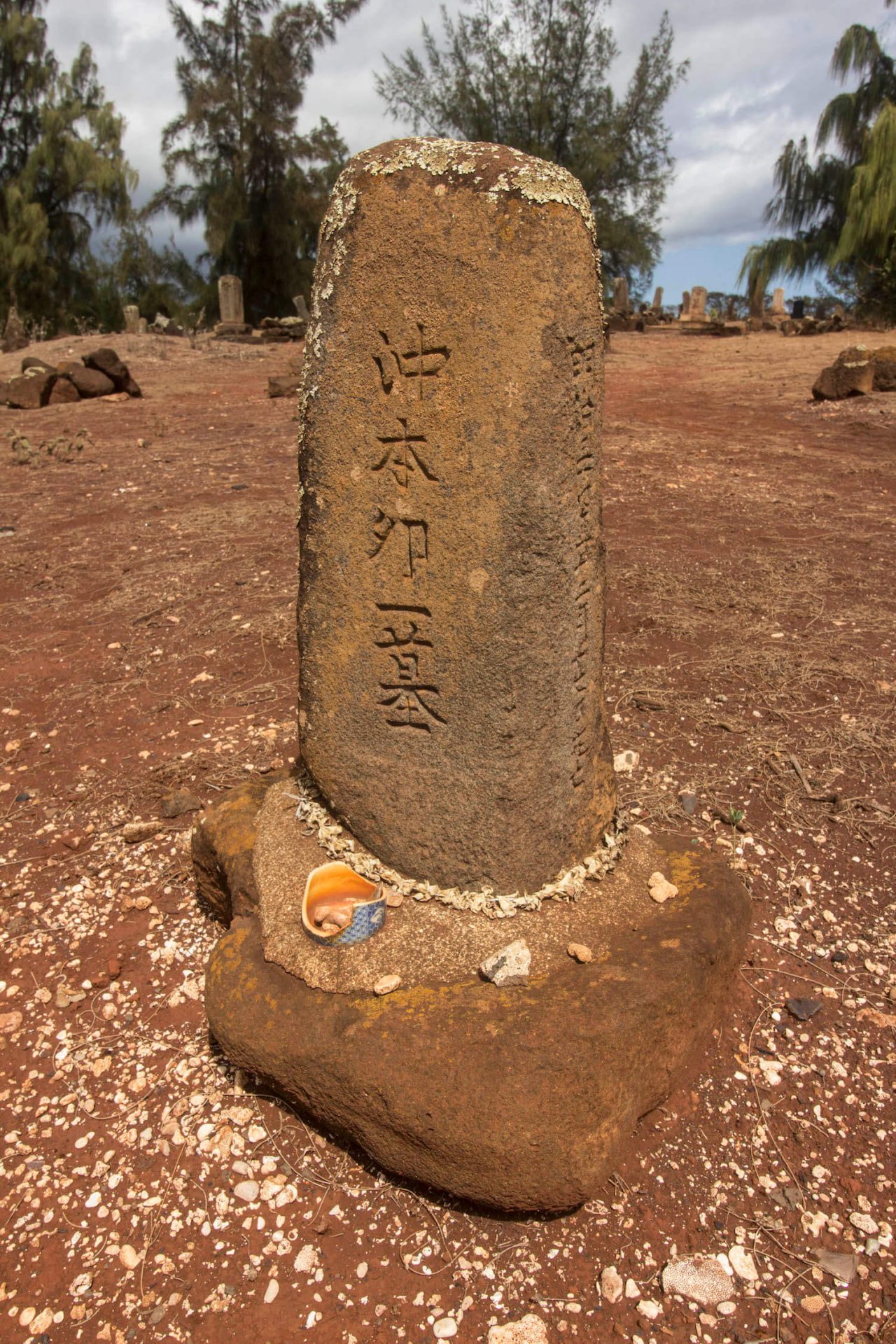 Needless to say, Hawaii is full of vast history! There’s a lot to learn about all the different cultures and traditions that make Hawaii what it is today. Even though their primary language is English they still incorporate some of their traditional language into their daily lives. A few of the most popular words were learned were Aloha (hello/goodbye), Mahalo (thank you), and holo holo (to go out for pleasure). It’s definitely a great vacation destination and I highly recommend to holo holo Hawaii! 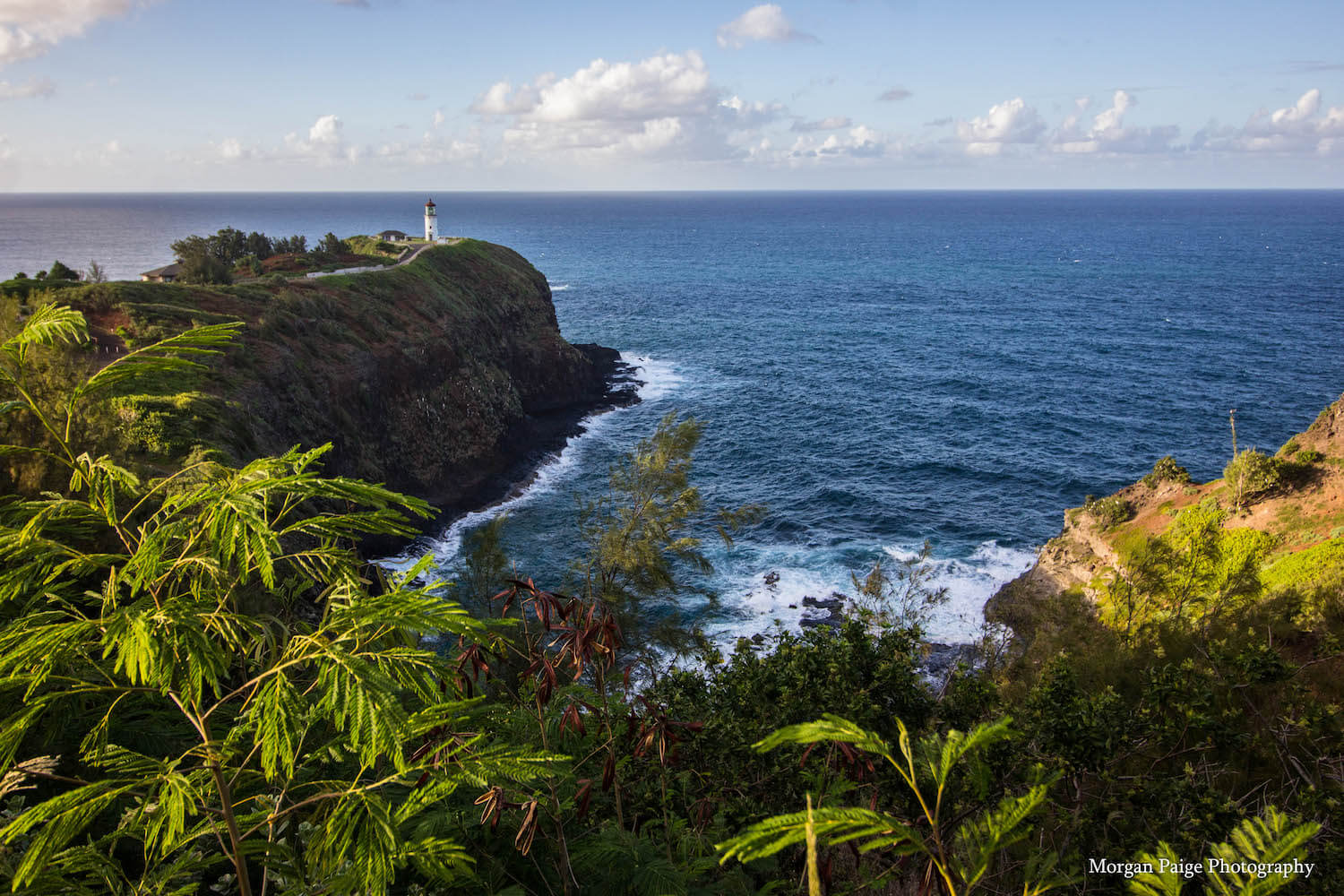 1 thought on “Welcome to Kauai, Hawaii!”