Sony’s Alpha range of mirrorless cameras have come a long way from where they started.

Let’s take a look at the original A7R. When it was first announced back in 2013 as a full frame 36.4 MP beast it was expected to blow the competition out of the water. Did it?

There were a few major issues with it that left people who switched over from Nikon and Canon with some pretty big regrets. For one, the focus peaking was terrible. Focus peaking is supposed to help with manual focusing by drawing lines over the parts of an image that are in focus, the A7R missed the mark a lot more often than it should have. Nailing focus is especially important with a 36.4 MP full frame camera as if it’s not perfect, any imperfections are going to be amplified by that monster of a sensor and be pretty obvious in the final image.

The issue extended to the auto focus. Simply put, it just didn’t work.

Fast forward to the next generation of the camera, the A7Rii.

What a difference a couple of years make! The Mark 2 version was in a whole new league when compared to its predecessor. Auto focus was blazing fast and hit the mark almost every time. It came with a whopping 42 MP upgraded full frame sensor, 399 auto focus points, 4K video and much much more. This time it wasn’t a disappointment, it lived up to the hype and then some. People hailed it as the best mirrorless camera on the market and it made the big 2 (Nikon and Canon) sit up and pay attention.

So when Sony announced that the A7Riii was on it’s way a couple of weeks back the question everyone was asking was, could this be as big of a step forward as the Mark ii was from the Mark i?

I’ll admit I haven’t had a chance to get my hands on the A7Riii yet but I’m a BIG BIG fan of the Mark ii so if that’s anything to go by then Sony’s newest creation must be jam packed with tons of full framed, mirrorless juiciness. 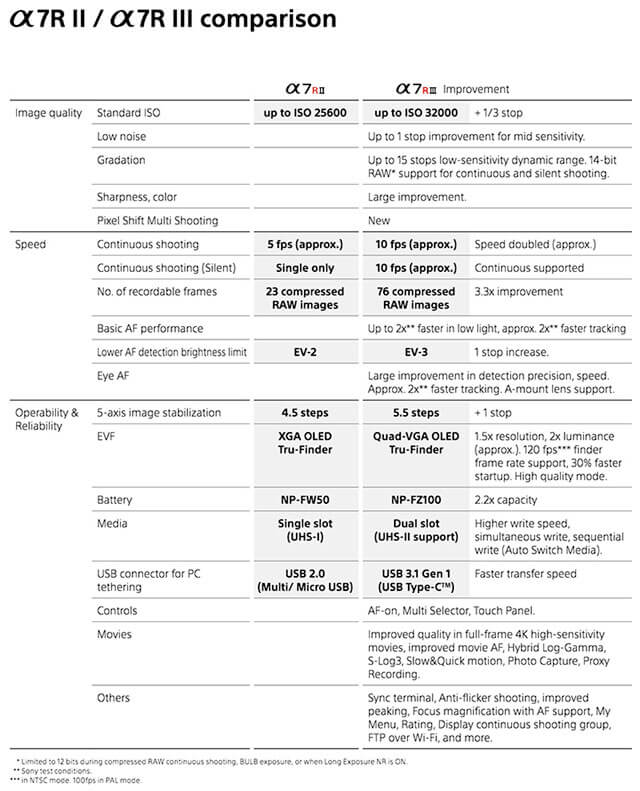 As you can see above it comes loaded with a whole bunch of upgrades but the most noticeable improvements (and most useful in my opinion) are:

From the reviews and what I’ve heard from other photographers, the A7Riii is another big step forward from the previous version. As big as the step forward from Mark i to Mark ii? Maybe not but nevertheless it’s still a very noticeable improvement.

Okay so this is where the DSLR fan boys and girls come in and say “Well once you add lenses to a full frame mirrorless camera body it’s the same size if not bigger than a DSLR, so how is it better for travel?”

The answer is simple, weight.

Yes it’s true that once you add a lens to any full frame mirrorless camera it can be more or less the same size as a DSLR but these days with the weight restrictions airlines place on luggage, the lighter your camera system is the better. That’s something they can’t argue against, the A7Riii is lighter than any pro level DSLR even with lenses attached.

Don’t forget that as travel photographers we carry our camera bags around with us all day, weight saving soon pays off in other ways too.

So is the A7Riii the best camera for travel photography? In my opinion quite possibly. Would I hurry to sell the A7Rii so I could upgrade? No, not like with the original A7R.

I would say to anyone though who wanted to upgrade to some pro level travel photography gear, and that hasn’t already bought into the Sony system, that the A7Riii is what they should go for without a doubt.

What do you think?