Doi in Cee is a Buddhist temple about 15kms outside of Chiang Rai, Thailand. Most tourists haven’t heard of it, and even less will make the effort to go there and check it out.

But trust me, it’s totally worth it if you do.

Like most temples in Thailand, Doi in Cee isn’t a single building. It’s a complex made up of several buildings, stupors, statues and shrines. But for the few people who have heard of this place, it’s the huge statues of Buddha that pique their interest.

There are at least four dotted around the site that I know of, but there could well be more hidden in the forest.

And for the photographers out there, like me, you’ll most likely be interested in one. The one that appears as if it has been abandoned and left for nature to reclaim.

The overgrown serpent staircase that leads up to a giant statue of Buddha and seems as though it’s about to be swallowed by the surrounding landscape is a pretty impressive sight to see. It’s hard to judge the scale of the statue from the photo but, if I had to guess, I’d say it’s about 20 meters tall.

How to get there

You can easily find Doi in Cee on the map. Simply search for it. You’ll need to rent a scooter or motorbike for the day to get there and also to drive around the temple complex since it is actually quite big. It takes about 30 minutes to drive from the centre of Chiang Rai to the temple itself.

We had a hard time finding the overgrown Buddha statue but, after 20 minutes of driving around, eventually found a Monk who pointed us in the right direction.

When you get to Doi in Cee, the last part of the drive is uphill towards the main temple area. To find the overgrown statue pictured above, you have to take a small road that leads off to the right at the bottom of the hill. The road looks like this:

Follow that road for about 100 meters and you’ll see the big overgrown statue of Buddha, you can’t miss it.

Once you’ve seen it, come back to the point in the photo above and continue straight. You’ll end up at the main temple area where there is a lot more to see.

Other reasons you need to visit Doi in Cee Chiang Rai

Like I said before, there are at least 3 other giant Buddha statues. One of them is of a Buddha sitting with crossed legs in the car park at the top of the hill. 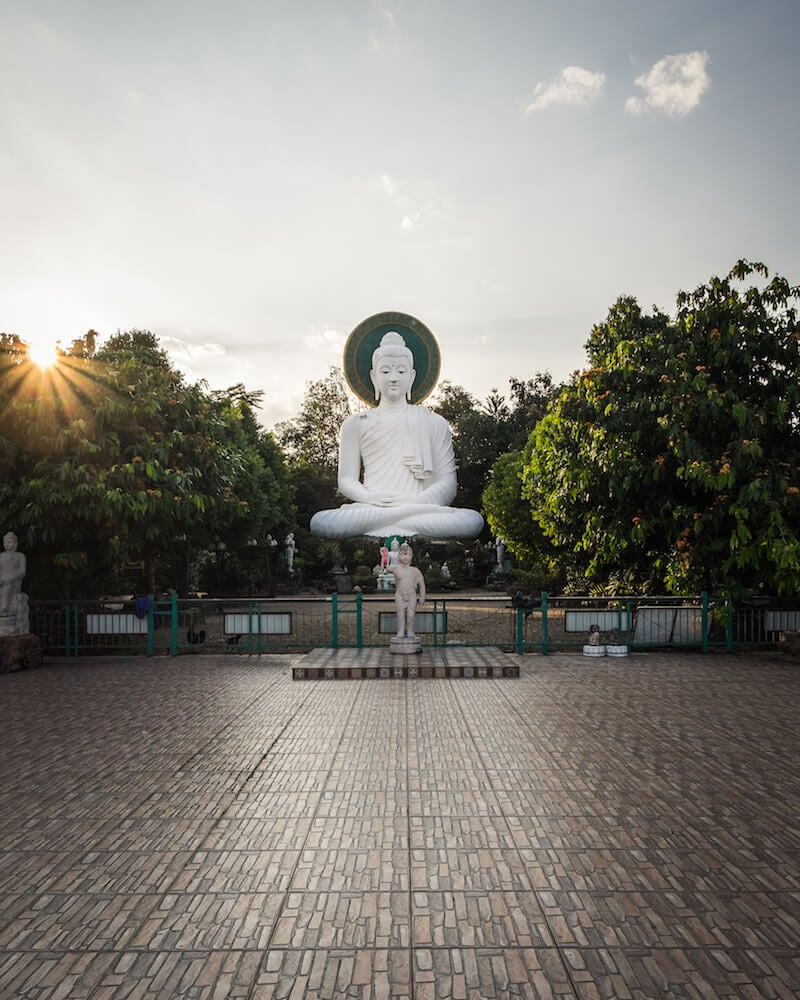 The other reason Doi in Cee should be on your list of alternative things to do in Chiang Rai is the view. Because it is perched on top of a hill, the views of the surrounding area are amazing. 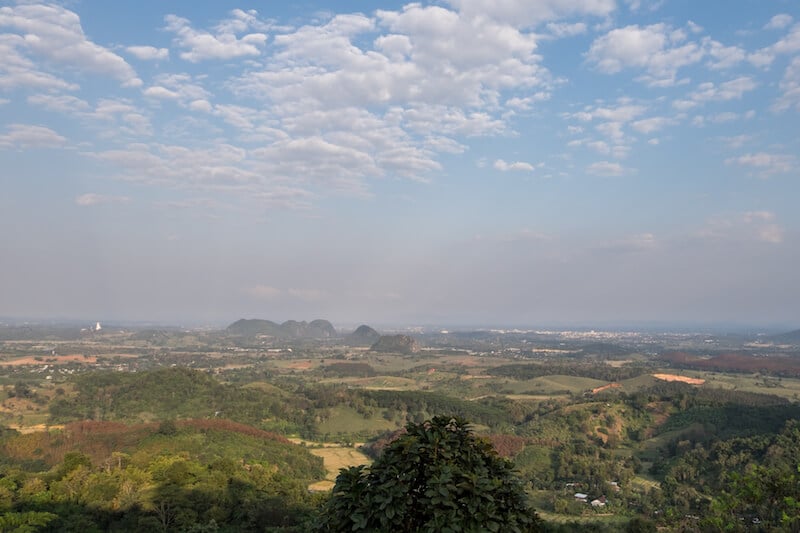 We spent around two hours exploring the area and taking photos. In that time we only saw four other people, and three of them were Monks. Seriously, we only saw one other tourist there the whole time, we couldn’t believe it. We kept asking ourselves how can such a beautiful place that’s only 30 minutes from Chiang Rai be so empty?

Just in case the statues, temples, views and peacefulness aren’t enough reasons for you to go (which they should be!) there was one more surprise waiting for us.

There are wild peacocks roaming around freely everywhere. 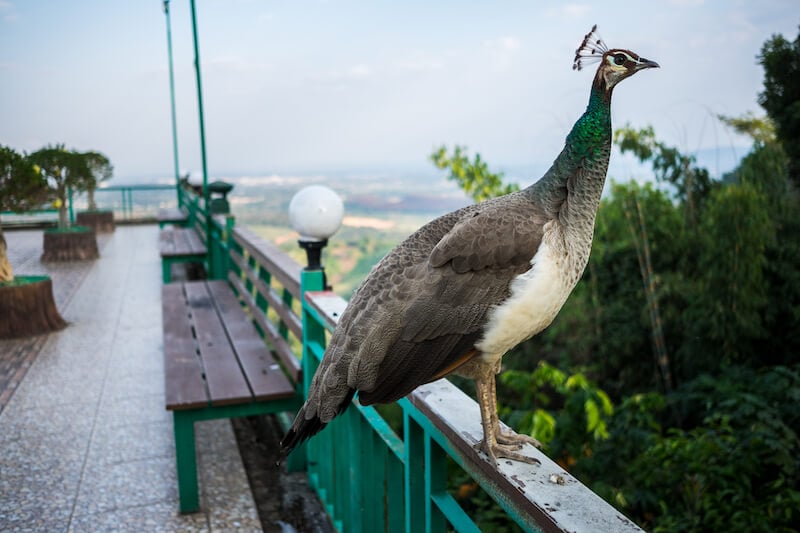 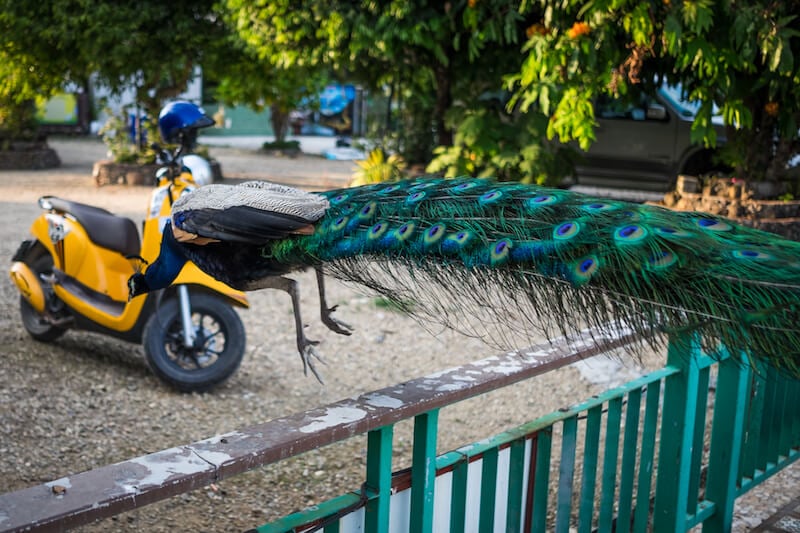 The best time to visit, especially if you want to take photos, is probably first thing in the morning for sunrise since the statues will catch the best light.

We went in the evening and they were backlit pretty heavily, making them difficult to photograph. Also, in the evening the overgrown statue with the snake staircase hardly gets any sunlight because it’s surrounded by such thick forest. Even so, if you don’t feel like a 6am start, you’ll still be able to get some great photos in the evening during the golden hour.

If you just want to see the statues and temples from the outside there are no opening hours, just drive in and take a look around! It’s not a popular tourist attraction so there are no gates and no guards, just Monks going about their day-to-day business.

The same goes for entrance fees, there aren’t any, it’s completely free. So if you’re looking for free things to do in Chiang Rai, then this should definitely be on your list.

If you’re looking for alternative things to do in Chiang Rai that will get you away from the crowds then you should go and visit Doi in Cee.

Seriously, just do it.

It’s such a hidden gem and a great way to spend a couple of hours of your day.