This is the story of how I discovered The Bahamas…

In a way, the life of travelling is analogous to our life on the planet. It is short and temporary, therefore the possibility of an escape in such a place is through a space that allows us to meditate about our present voyage in life.

“See you at Barreterre Dock in a week!”

And there we were two hours after landing, on a kayak, packed with roughly enough food and water for 7 days, a tent, a fishing rod, a minuscule gas canister, two plastic bowls, snorkel gear, an emergency cellphone, a good book and a map of the surrounding islands. Paddling out on a gloomy afternoon through a mangrove cove out into open water on the Northeast side of Great Exuma Island, with only 4 hours of daylight remaining. The dark grey clouds that hovered above us were mirrored by the turquoise waters, creating a dismal mood as we made our way to a choice of three uninhabited islands to sleep for the night. 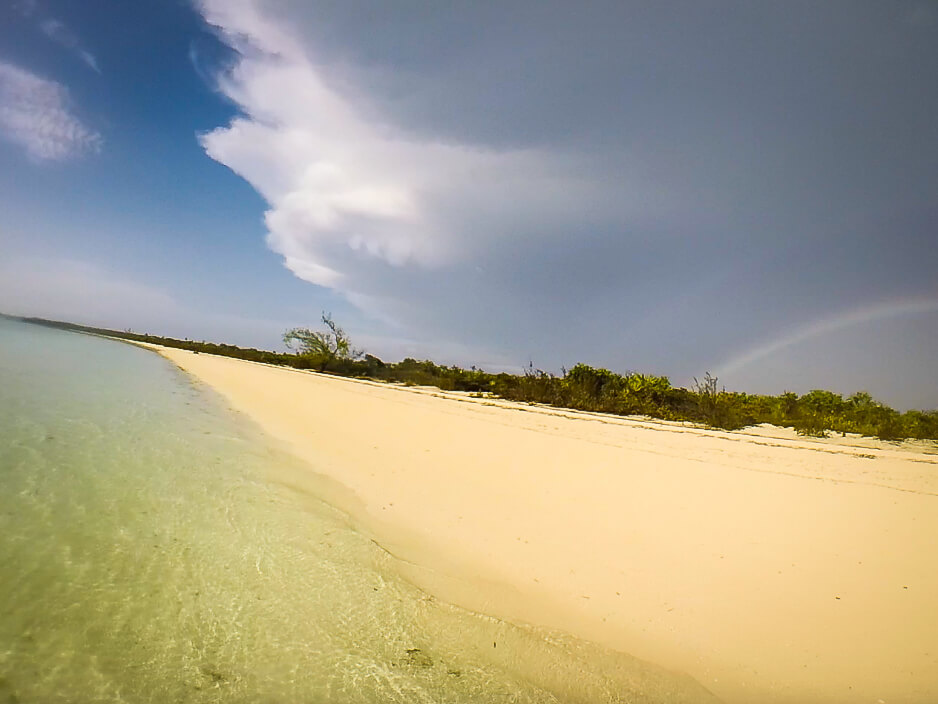 Rewind the clock back 72 hours. It was a temperate mid-June morning in Montreal and as I’m browsing through my feed I came across an exorbitantly cheap flight to Great Exuma Island. I was studying in Canada at the time, instinctively purchased 2 tickets and called my girlfriend to tell her that we were going to the Bahamas. The catch? The flight was in less than 48 hours.

After quickly realizing that the Bahamas were for honeymooners and that low-cost options were minimal to non-existent, we had to find a backup plan or forfeit our non-refundable tickets. Which, as you can imagine, was not an option. Further investigation revealed that Exuma Island is surrounded by 365 cays (pronounced ‘keys’), most of them uninhabited, so we figured that if we don’t have any accommodation we can make it a tropical island getaway by camping on the islands.

After a quick email to a company which offers guided kayak tours that happens to be an American couple who moved to the island 15 years ago to raise their 2 children, we got a responce saying that it is possible to also rent out a kayak independently for the week. Turns out that if you just rent the kayak, they only supply drinking water.

Ready for this improvised adventure, we head to the airport with our groceries, tent, snorkel gear and a backpack each.

Over the next week, we kayaked over kilometers of disparate shades of blue, the seabed varying in depth and composition, visiting a total of 4 islands, 3 of which we camped on. We did not see a single person or boat during that time. Schools of stingray, sharks and exotic fish were the local scenery, gliding underneath us while we swam and paddled through the water.

The sun was excruciatingly hot and cutting off palm tree leaves and using them as shade was the only option apart from our overheated tent. The only accessible parts of these islands are the beaches. All the inland greenery that invades the islands is a thick, dense scrub, crawling with sizable iguanas.

On the first island, we stumbled across a deserted property with a huge 2-story house and 2 guest houses. Run-down and abandoned for more than 10 years, there was an eerie vibe as we visited the home, still furnished with curtains, beds, and books.

As we spent hours discovering the property we couldn’t stop asking ourselves who’s house this once was. After all, The Bahamas is known to be an offshore haven for criminals and billionaires.

On the third night, we are woken up by a howling sound that gradually gets louder. Within 5 minutes we are struck by gale force winds, the tent unpins itself with us inside, forcing me to flatten it onto us, while we get battered for 8 hours by the fiercest storm we had ever witnessed. We later learnt from the American couple that it was one of the roughest storms to hit the Cays in a number of years.

We woke up the next morning on Norman’s Pond Cay, not a human in sight, our little campsite nestled between the only 2 Casuarina trees on the 3.5 kilometer-long white sandy beach. As if nothing had happened. There wasn’t a cloud in the sky.

For a week, we were off the grid, no phones, no internet, no people and no electricity. Fishing, snorkeling, campfires, stargazing and endless conversations as the sun set fueled our week of discovery in the Exuma Cays.

It wasn’t always easy, but what is the price you are willing to pay for a genuine sense of adventure?

2 thoughts on “The Bahamas – Discover Them Yourself”