It’s hard to narrow down the best beaches in the Algarve to just six since there are so many candidates.

On a recent road trip through the south of Spain and across the Algarve I stopped at quite a few.

But it’s these six that have left a lasting impression on me.

A map of the best beaches in the Algarve

The map below shows where the six beaches you’ll learn about in this article are located.

Depending on where you are in the Algarve or how far you are willing to travel, you should be able to find somewhere on this list that can fit around your plans.

The further west you go the more the coastline becomes rugged and weathered.

You’ll start finding towering cliffs hanging over the beaches as well as stacks and arches out to sea that have been created over the course of many years by the erosive power of the waves.

But regardless of where you are in the Algarve, the Atlantic coastline is stunningly beautiful.

The six places you’ll learn about in this article are (in order from west to east):

Praia do Tonel is one of the smaller beaches found in Sagres, the south-westerly tip of Portugal.

But it’s the long rolling waves paired with the imposing cliffs that make it so beautiful. Not to mention being a hot-spot for surfers. 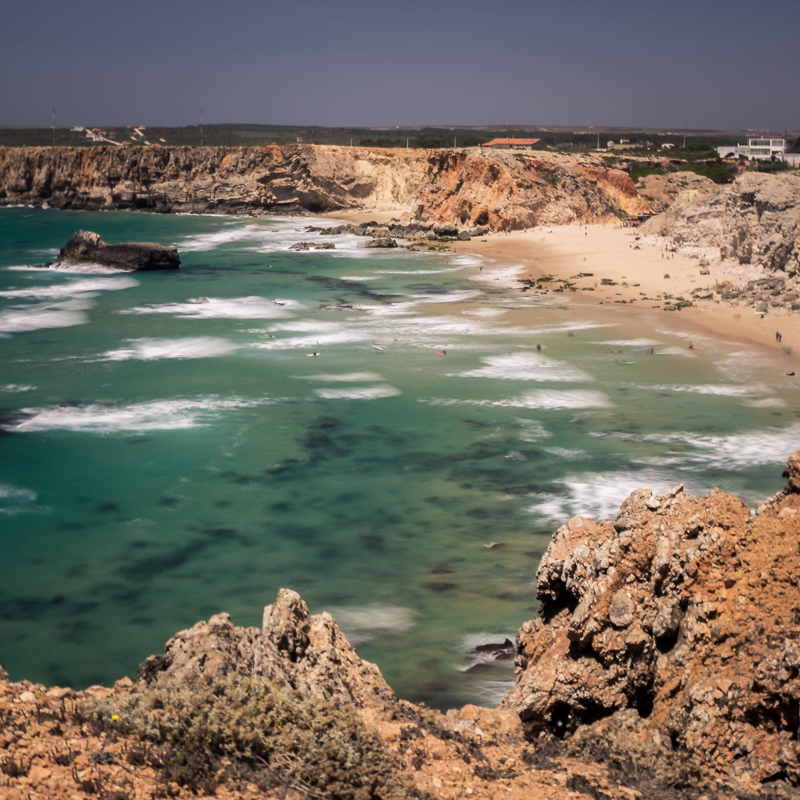 If your main aim is to come away with a great photo then it is best to shoot from the top of the cliff looking down.

The best place, in my opinion, is the cliff where the Fortaleza Sagres (Sagres Fort) sits.

From the Fort, Praia do Tonel is in a north-westerly direction. Once you have a good look around you’ll be sure to find some great compositions from that vantage point.

Cabo de São Vicente is another great location in Sagres to take some photos. It’s not strictly a beach though. It’s a rough stretch of coastline where the waves smash up against the rocky cliff-face and where a lighthouse sits watching over it all.

The one problem with shooting photos here?

It’s so windy you feel as though you are going to be blown off the barrier-free clifftops. So be careful and don’t venture too close to the edge!

Again, this isn’t strictly a beach but you can see why it made the cut. 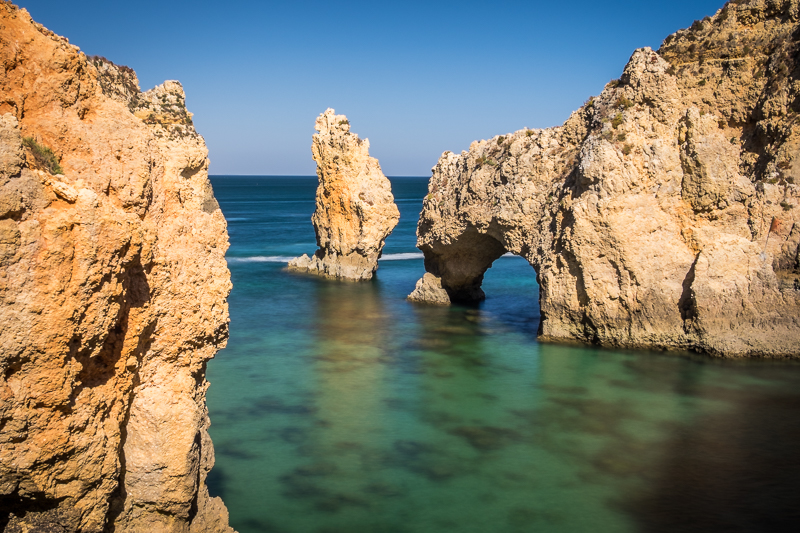 Ponte da Piedade is a group of rock formations mainly made up of stacks and arches just off the coast of Lagos.

It’s not just the breathtaking rock formations that make Ponta da Piedade such a beautiful place though. The surrounding waters are crystal clear.

The number one things to do in this area is to join a Kayak tour that takes you in and around the stacks and arches. It isn’t the cheapest activity, but totally worth it. 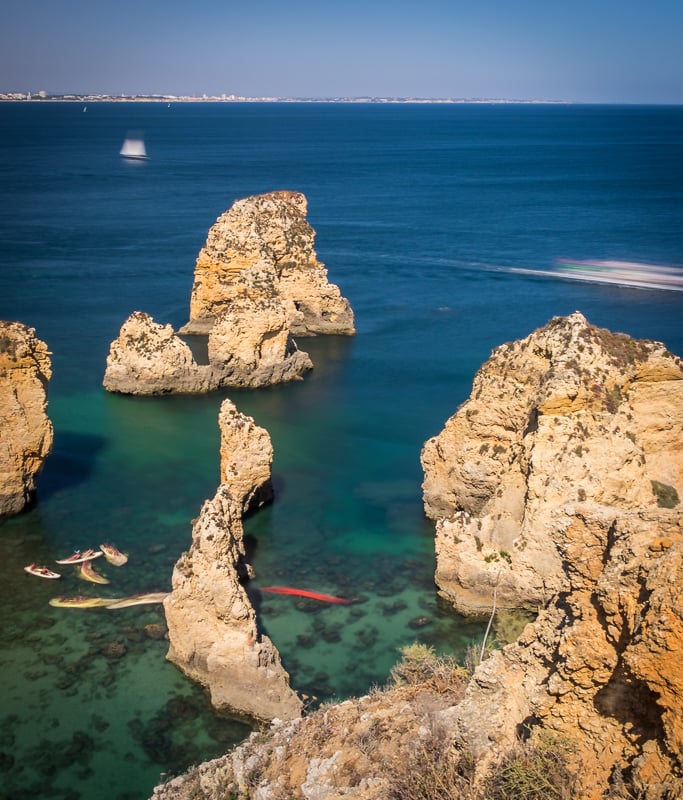 A kayak tour will last around 2-2.5 hours and will cost about €35 per person. You’ll be in a group of around 15-20 other people all being lead by a local guide.

If you would prefer to explore the rock formations by boat then there is an option to do that as well.

You can pre-book online which will save you some money. To do so, check out the tours listed below.

You may also like: Olhão Is A Sleepy Portuguese Fishing Town Full Of Stunning Street Art

Portimão is a popular holiday destination with foreign and Portuguese tourists alike. So you might think that, like many tourist hotspots, the beaches might be a sunbed and umbrella utopia.

But you’d be wrong. 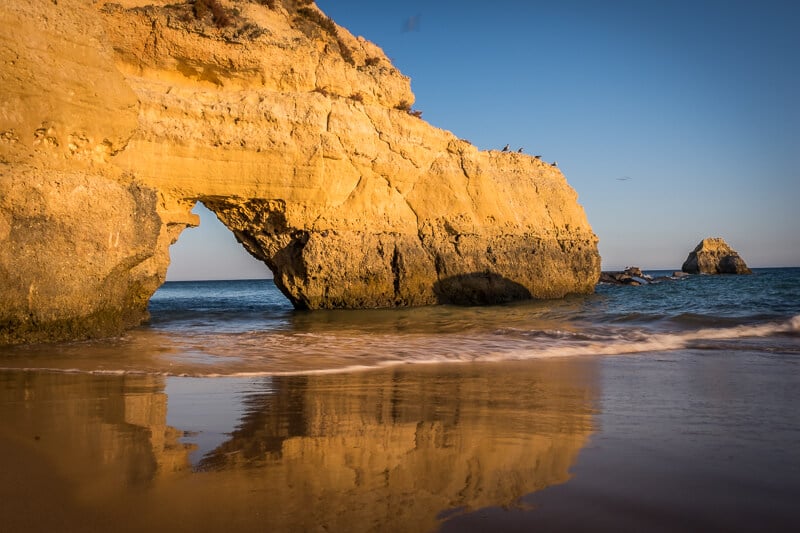 The beaches in and around Portimão boast clean, fine yellow sand that is almost powder-like and the familiar rock formations found all over in the west of the Algarve.

If you are looking out to sea on Praia Tres Castelos then right at the far end of the beach, to the left, you’ll find the arch that is pictured above.

It’s a great place to capture some photos during golden hour since the setting sun perfectly baths the arch in beautifully defused light.

It’s also not a bad place to sit and watch the sun dip below the horizon whilst sipping on a local Sagres beer if that’s more your style.

Praia de Benagil is special because, not only is it one of the best beaches in the Algarve itself, but it’s right next to the Benagil Caves.

These amazing caves can be accessed in three different ways.

First, you can rent a kayak or stand-up paddleboard and paddle your way there directly from the beach. This way you can enter the cave, pull right up to the shore and get out to explore in your own time.

Second, you can take a boat tour from nearby Portimão if that’s where you are based since there isn’t much in Benagil apart from the beach and caves and you don’t have your own transport.

The third option is to swim there from the Benagil beach. I personally swam there since it’s not too far. But I do not recommend it if you’re not comfortable in deep water and not a strong swimmer. I actually swam it twice so it’s very doable, but I saw some people who looked like they wished they had just rented a kayak. It can be wavy, there is a current and the water is extremely cold.

Once you get inside the cave though, however you get there, it’s a sight to behold.

Praia da Marinha is right next to Praia de Benagil, just a 1.9km drive or walk away.

It’s considered to be in the top 10 most beautiful beaches in the whole of Europe by the Michelin Guide, one of the best beaches in the world by CNN and was awarded the Golden Beach award by the Portuguese Ministry of the Environment.

It’s most recent accolade is that, in 2015, it was officially named one of the best destinations in Europe by European Best Destinations.

And it’s easy to see why this beach is held in such high regard. 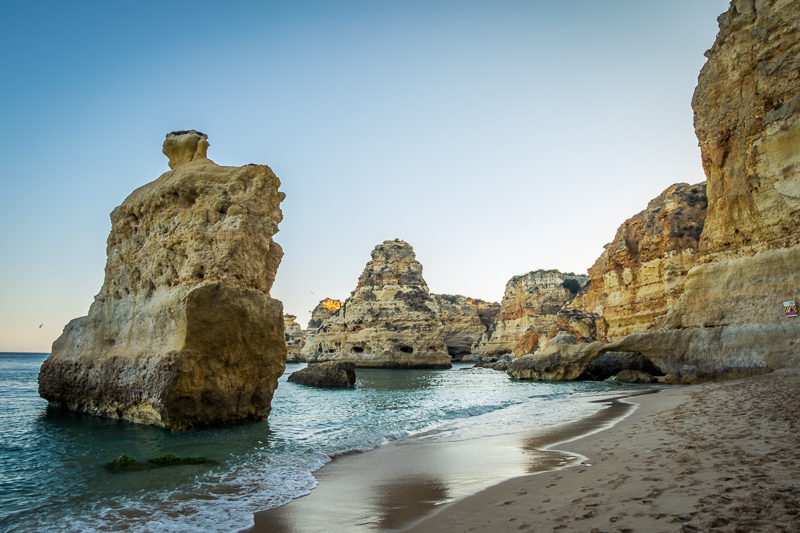 The picture-perfect beach has made its way into many tv adverts and promotional posters for the Algarve because of its pristine waters, white sand and impressive rock formations.

Both Praia da Marinha and Praia de Benagil can be visited in one day since they are so close to each other and that’s what I recommend you do.

You could even walk between the two if you felt up for the 1.9km hike. Just know that some parts are uphill if you walk from Benagil to Praia da Marinha, so bear that in mind.

Finally, we come to the last beach on this list and the most easterly, right next to the Spanish border.

You won’t find the rock formations, stacks and arches that are common in the west of the Algarve here.

The beach in the small town of Monte Gordo is a long stretch of sand spanning for as far as the eye can see. The beach is very wide with small sand dunes separating it from the rest of the town.

The thing that first struck me about this beach was the patterns and shapes left in the sand by the receding tide. 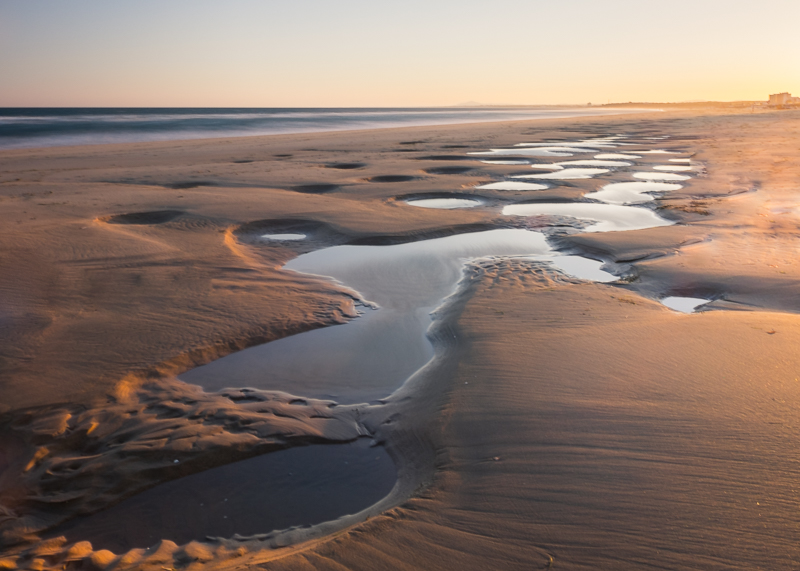 Because the beach is so wide and fairly flat it means that there is a big difference between the shoreline at high tide and at low tide.

At low tide, the exposed sand is left full of small pockets of water and leading lines that weave and bend their way down to the water. 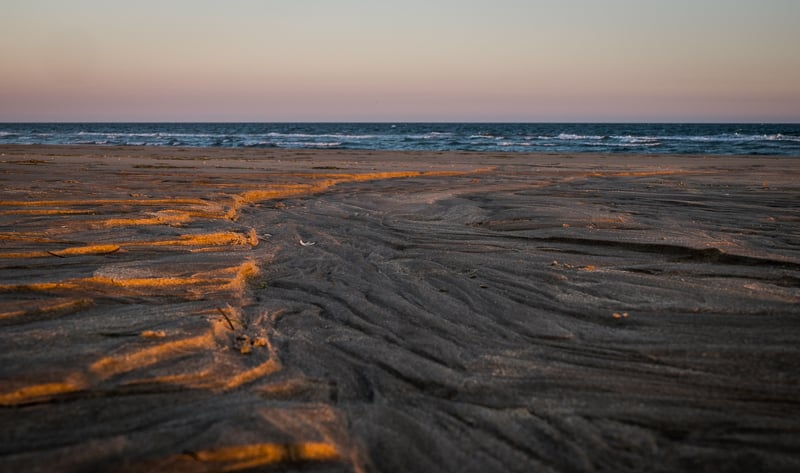 It’s because of these patterns and lines, ones that landscape photographers spend their days searching for, that I consider Monte Gordo to be one of the best beaches in the Algarve.

In general, the town feels like the place where the Portuguese go on holiday. It has a holiday destination feel to it but the only language I heard spoken was Portuguese.

It’s a nice spot to stop for a day or two, especially if you have just finished a long drive across the border from Spain like we had.

These are just six of the best beaches in the Algarve

But there are many, many more.

When it comes to seascape or landscape photography, the Algarve is one of the best places for it in Europe.

It’s the combination of crystal clear water and rock formations that have been created from years of fighting with the rough Atlantic Ocean that makes it so photogenic.

Have you been to any other awesome beaches in the Algarve that you think deserve a place on this list? Let me know in the comments below.

What to do next: